SEOUL, Feb. 22 (Yonhap) -- The movements of South Korean stocks next week are likely to depend on the developments in the novel coronavirus outbreak, analysts said Saturday.

The benchmark Korea Composite Stock Price Index (KOSPI) closed at 2,162.84 points on Friday, down 3.6 percent from a week ago. This week, the index's only positive session came on Wednesday, when it advanced 0.07 percent.

Analysts said that investor sentiment this week was rattled by the fast-spreading novel coronavirus and that is likely to continue through next week unless health authorities make a major breakthrough in their fight against the deadly virus.

The number of COVID-19 infections in South Korea has spiked in the last three days, with health authorities identifying one virus-related death on Thursday. 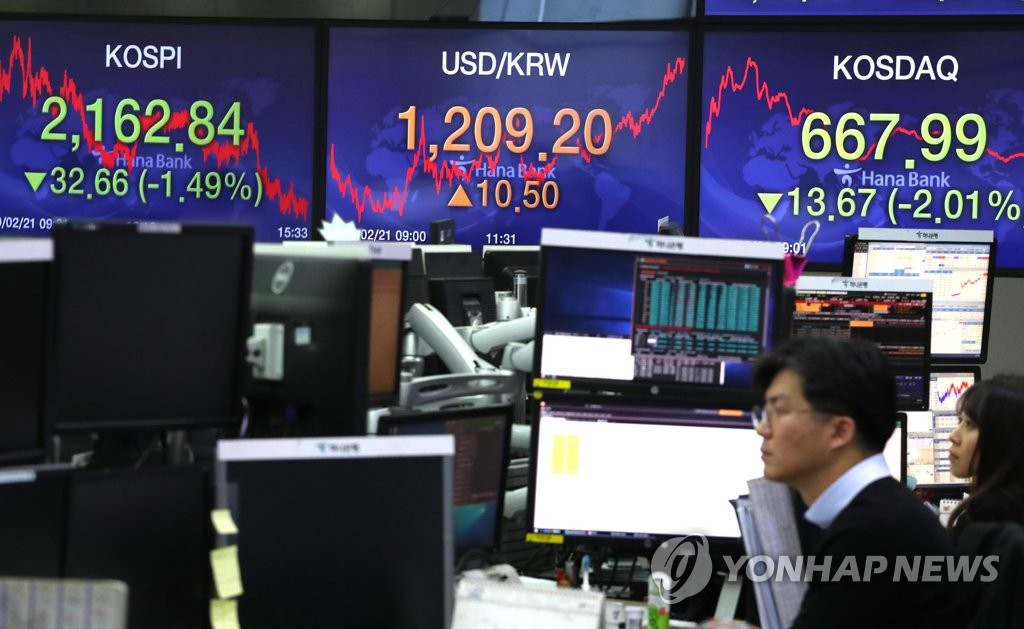 As of Friday, the Korea Centers for Disease Control and Prevention confirmed 204 novel coronavirus cases, with most of them discovered in the southeastern city of Daegu and surrounding North Gyeongsang Province. Local health authorities declared that the novel coronavirus has begun spreading locally.

"The pace of new infections reported outside China is weighing down on investor sentiment," Noh Dong-kil, an analyst at NH Investment & Securities, said. "Investors will keep their eyes on global supply chain risks caused by the novel coronavirus."

Aside from the virus outbreak, local investors will also keep their eyes on the Bank of Korea (BOK)'s monetary policy board meeting on Thursday. The base rate has been kept frozen at 1.25 percent since October.

The board had widely been expected to stand pat on the policy rate for the time being, although recent situation of the new coronavirus has apparently prompted many to expect a rate cut in the near future.

"There are also expectations of the government drafting a supplementary budget," said Kim Yoo-mi, an analyst at Kiwoom Securities.

Electricity and lumber stocks were among gainers this week, while major players in the tech, auto and pharmaceutical industries lost ground.

Analysts predicted that the local currency will come under selling pressure next week due to risk-off sentiment caused by the novel coronavirus outbreak.

Seoul bourse to be swayed by developments in new coronavirus outbreak

Seoul bourse to be swayed by developments in new coronavirus outbreak