Among the agenda items in talks between Jeong and U.S. Secretary of Defense Mark Esper, slated for Monday (local time), are a scheduled spring joint military exercise and preparations for the wartime operational control transition, according to defense officials here.

The allies reportedly agreed to stage the combined drills in early March. But South Korea is fighting against the rapid spread of the deadly COVID-19 virus, raising the possibility that Seoul and Washington will readjust the timing and size of the training.

"So far, there's no change in connection with the combined exercise," a Ministry of National Defense official said.

Jeong and Esper are also expected to exchange their views on how much Seoul should pay for the stationing of the U.S. Forces Korea.

The two sides have been struggling to strike a deal in the Special Measures Agreement talks. 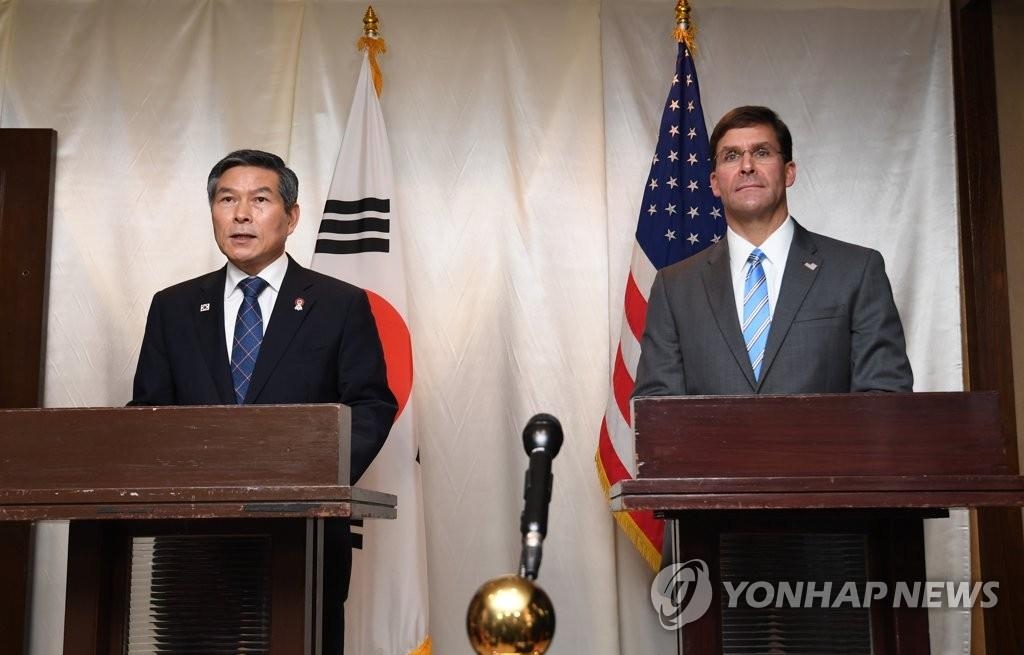 Other major issues include South Korea's response to the coronavirus, the fate of the Seoul-Tokyo military information-sharing agreement, called GSOMIA, and a plan to upgrade the THAAD missile defense system deployed on the peninsula.

The minister will also visit the Korean War Veterans Memorial in Washington, D.C., and a veterans hospital, which are meant to commemorate the 70th anniversary of the outbreak of the 1950-53 Korean War. He will meet U.S. Congress and National Defense University officials for discussions on Korean Peninsula situations and ways to further strengthen the alliance.

On his way back home, he is to make a stopover in California for a visit to marine units that took part in the Korean War, according to his ministry.

It will be Jeong's first visit to the United States since Esper took office in July last year. The secretary visited South Korea in June and November.

Jeong is to return to Seoul on Friday.

S. Korean defense minister due in D.C. for talks on alliance

S. Korean defense minister due in D.C. for talks on alliance