SEOUL, Feb. 23 (Yonhap) -- The ruling Democratic Party asked the government Sunday to draw up a supplementary budget for use in efforts to contain the novel coronavirus that has been gaining force in South Korea.

Rep. Lee In-young, floor leader of the party, also said the National Assembly would hold a plenary session on Monday to discuss "extraordinary" measures including the establishment of a special parliamentary committee on the COVID-19 pandemic.

"(We) request that the government draft a supplementary budget proposal immediately and report it to the National Assembly," he said in a statement. 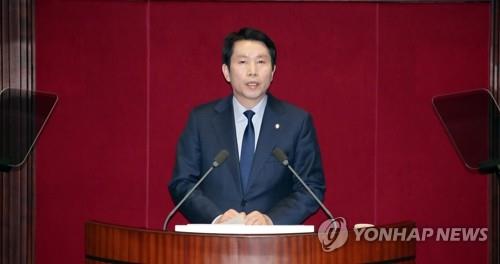 If so, the parliament will be quick to review the plan and handle a related bill. He said it would be able to be passed by March 17, noting it took 18 days for lawmakers to approve an extra budget bill when South Korea was hit by the MERS outbreak in 2015.

Lee also asked the education ministry to consider delaying the opening of the spring semester, slated for early March, in order to help curb the spread of the virus.

The ruling party plans to hold a trilateral policy consultation meeting with the presidential office and the government later in the day on responding to the viral disease.

Ruling party calls for extra budget to fight against COVID-19

Ruling party calls for extra budget to fight against COVID-19