SEOUL, Feb. 23 (Yonhap) -- More than half of coronavirus infections in South Korea are linked to the homegrown religious group of Shincheonji, data showed Sunday.

The religious organization, known as Shincheonji Church of Jesus, Temple of the Tabernacle of the Testimony, has been suspected as a hotbed for the recent surge in infections of the COVID-19 virus in the southeastern regions of Daegu and North Gyeongsang Province.

As of Sunday evening, 329, or about 54.7 percent, of the country's 602 confirmed cases of the highly contagious virus are linked to members of the group and people who came into contact with them, according to the data by the Korea Centers for Disease Control and Prevention (KCDC).

The nation's 31st patient, a Shincheonji follower, reportedly visited a Daegu church four times in total before and after she felt symptoms of the coronavirus infection. She tested positive for the new coronavirus on Tuesday.

Daegu, a metropolis of 2.4 million people about 300 kilometers southeast of Seoul, and the surrounding North Gyeongsang Province had remained free from coronavirus infection until patient No. 31's case was announced.

Earlier Sunday, President Moon Jae-in said the South Korean government has decided to raise the country's disease alert by one notch to the highest level in its latest heightened response to the confirmation of hundreds of additional cases over the weekend.

He said the health authorities are taking "special" steps in connection with the followers of Shincheonji, viewed as an epicenter of many infections reported in the country over the past few days.

The president also requested cooperation by Shincheonji followers and asked the public to refrain from engaging in mass gatherings for the time being.

Against the backdrop, the Shincheonji Church made a public announcement on its website, saying that the organization is closely in cooperation with the health authorities to prevent further infections.

"We've asked 9,294 members of our Daegu church under quarantine and all of our followers are being checked for the virus," an official from the religious organization said in an announcement streamed online at 5 p.m. "Since Feb. 18, we've shut down our 1,100 churches and annexed buildings. And all services, meetings and events are canceled."

He said the church has submitted the entire list of its worshipers but 253 people are still out of contact.

He asked the public to refrain from spreading groundless rumors about the church and its members, claiming that it also is a victim of the widespreding coronavirus originated in China. 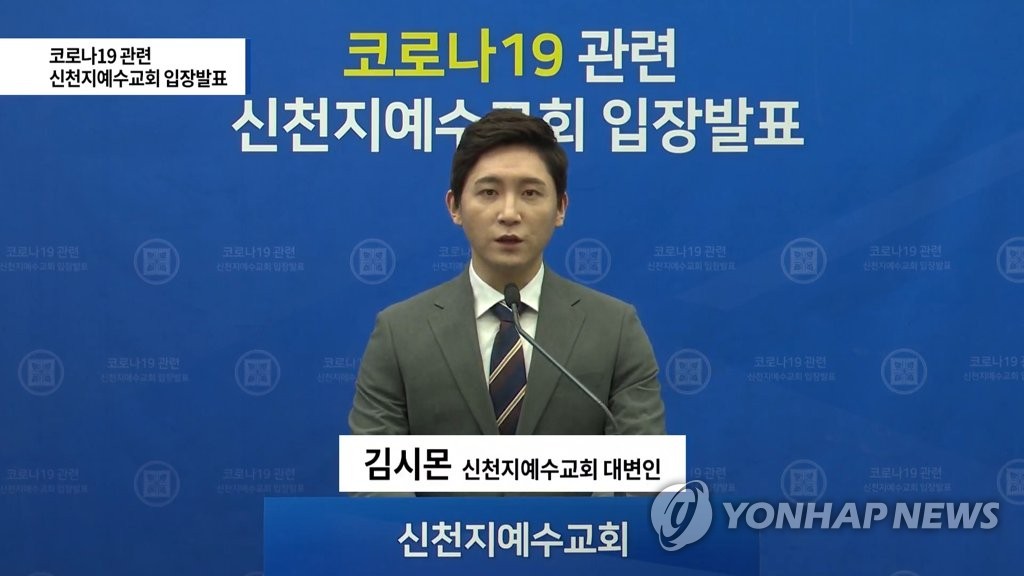