Kang explained Seoul's stepped-up efforts to contain the spread of the COVID-19 epidemic, such as raising its virus alert to the highest level for the first time in more than a decade, as South Korea has reported six deaths and more than 600 confirmed cases.

The WHO chief voiced confidence that South Korea will be able to cope with the virus, based on its robust system to respond to such a viral outbreak and its past experience in fighting the Middle East Respiratory Syndrome, according to the ministry.

He added that his organization will closely cooperate with the Seoul government in overcoming the virus. He also noted the need for support from the international community for helping countries with weak health care systems.

Kang shared the understanding that the international community should work together to enhance heath conditions in vulnerable countries with the U.N. health agency at the center of the efforts.

Kang was in Europe to attend international conferences, including a session of the U.N. Human Rights Council in Geneva. 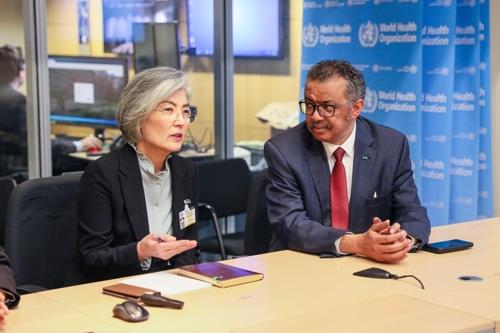