SEOUL, Feb. 24 (Yonhap) -- Thirteen service members have been confirmed to have the new coronavirus as of late Monday, and around 7,500 others are quarantined as part of efforts to stop the virus from spreading further in barracks, the defense ministry said.

Ten COVID-19 cases in the Army and one each in the Navy, the Air Force and the Marine Corps had been confirmed as of 4 p.m. Monday, up from a total of 11 cases tallied earlier in the day, according to the ministry.

The 13 military members were among South Korea's 833 cases of the new coronavirus as of late Monday that include seven deaths among civilian patients.

In the wake of a leap in the number of confirmed cases over the past several days with a cluster of infections linked to a religious group in the southeastern city of Daegu and a hospital in its adjacent country of Cheongdo, the authorities checked all service personnel with a history of visiting the regions or having contact with patients, and they are currently isolating around 7,500 soldiers at their bases.

"Of them, about 350 people either have shown symptoms or had direct contact with patients. But we have applied tougher quarantine standards as preventive steps," deputy ministry spokesperson Moon Hong-sik told a regular briefing. 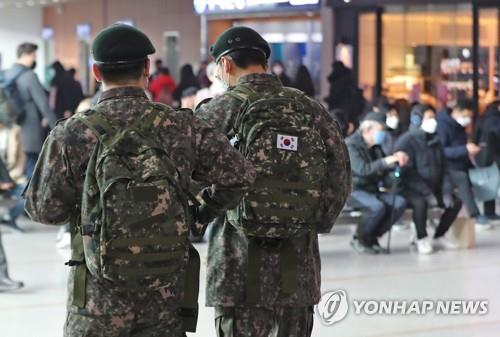 As the government on Sunday raised the alert level to "serious," the highest in its four-tier system, the ministry has formulated additional measures to contain the outbreak.

All outdoor drills have been halted across the country, and those carrying out off-installation drills were ordered to return to their bases immediately, according to the officials.

In order to prevent the situation from affecting military readiness, the ministry also issued operations-related instructions to all branches of service that call for extra measures to ensure vigilance among key personnel at ground posts in border areas, military command and control centers, and among those in charge of major maritime and air surveillance systems.

In order to provide precise information and to minimize confusion, the ministry began disclosing official data on new coronavirus cases among soldiers twice a day – at 10 a.m. and 5 p.m. -- on Monday, according to the officials.