SEOUL, Feb. 24 (Yonhap) -- The Bank of Korea (BOK) may again stand pat on its policy rate this month but will likely slash it in the first half of the year to support the local economy as it faces growing headwinds from the new coronavirus outbreak, a poll showed Monday.

In a survey conducted by Yonhap Infomax, the financial news arm of Yonhap News Agency, nine out of 19 experts polled expected the central bank to keep the base rate steady at a record low of 1.25 percent this week.

However, 10 out of the 19 experts expected a rate reduction next month, and the number grew to 14 for the first half.

"The number of people infected with COVID-19 sharply has increased since mid-February, along with the need for policy measures to prepare for its economic fallout," said Kong Dong-rak, an analyst at Daishin Securities.

The BOK board will hold its rate-setting meeting Thursday, when it is also scheduled to offer its latest growth outlook for the local economy.

A majority of the experts earlier anticipated the BOK board to keep the base rate frozen in the first half, with just five of the 19 experts expecting a rate reduction before the end of March and only eight before the end of June. 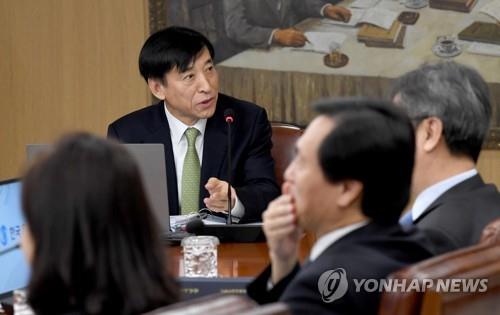 "With the COVID-19 related uncertainties persisting, the negative impact on the economy and economic sentiment may not be removed easily," said Kyobo Securities analyst Baek Yoon-min.

"The government too has acknowledged the need for active steps to defend the economy, but in that an extra budget may not be possible in the near future, we believe the possibility of a base rate reduction in February may be more likely," the analyst added.

As of Sunday, the country has reported a total of 602 virus cases and six deaths from the potentially fatal illness.

The BOK earlier estimated the South Korean economy would expand 2.3 percent this year, rebounding from last year's 2-percent expansion, but is widely expected to join many others in revising down its growth estimate for Asia's fourth-largest economy.

Global ratings agency Moody's has slashed its growth outlook for the South Korean economy to 1.9 percent from the previous 2.1 percent, citing the crippling effects of COVID-19 on the local economy, as well as that of China, the largest importer of South Korean products.

South Korea's exports have dropped for 14 consecutive months as of January. This steady decline in exports has partly been blamed for the country's slowest economic growth of 2 percent in a decade last year.

"We believe the BOK is still taking a hawkish stance, but the unexpected outbreak of the virus may have created additional uncertainties and downside risks in the path to a gradual economic growth," said JP Morgan analyst Pak Seok-kil.

"Accordingly, we expect the monetary policy board to take a preemptive measure with a base rate cut in February."