SEOUL, Feb. 24 (Yonhap) -- South Korean airlines have suspended or plan to halt flights to South Korea's southeastern city of Daegu, where hundreds of new coronavirus infections have been reported over the weekend.

Korean Air said the two routes will be suspended until March 28.

The move came as Daegu -- South Korea's fourth-largest city, with a population of 2.4 million -- has emerged as a hotbed of coronavirus outbreaks in South Korea.

Of the 763 people so far infected with COVID-19, 636 are based in Daegu, about 300 kilometers southeast of Seoul, and neighboring North Gyeongsang Province. 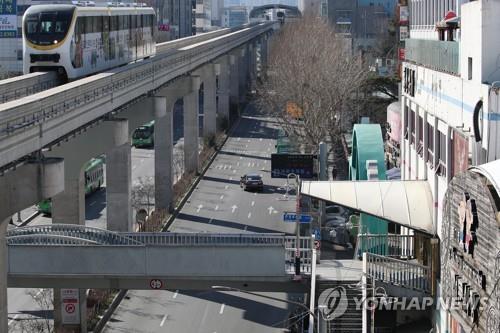 Air Busan plans to remove its office in Daegu in coming weeks.

Jeju Air Co., South Korea's biggest low-cost carrier, said it will suspend its Daegu-Jeju route -- its only domestic route connected to Daegu -- from Monday through Feb. 29.

The carrier said it will suspend nine Chinese and 19 Southeast Asian routes in March due to a sharp decline in air travel demand over the coronavirus outbreak.

Airlines to suspend flights to Daegu over virus fears

Airlines to suspend flights to Daegu over virus fears