SEOUL, Feb. 24 (Yonhap) -- President Moon Jae-in plans to hold a roundtable meeting with a group of infectious disease experts Monday on how to counter the rapid spread of the COVID-19 virus in South Korea, a Cheong Wa Dae official said.

Moon has invited them to his weekly meeting with senior Cheong Wa Dae aides scheduled to open at the presidential compound in the afternoon.

The president plans to use his opening remarks, which will be open to the public, to reaffirm the government's resolve to focus all-out efforts on fighting the virus and instruct relevant authorities to explore every possible "special" measure, according to the official who spoke on background.

Cheong Wa Dae has yet to release the number and list of those experts to be present at the session.

"The basic principle is to take a two-track approach to contain the coronavirus and to revive the economy. Given the recent situations, however, it's necessary to place the top priority on quarantine measures," the official told reporters. "The economy is about preparing for the future. We can't be negligent either in that sense."

The government is expected to propose supplementary budgets this week.

On Sunday, Moon presided over an inter-agency meeting on the country's response to the viral disease that has been fast spreading nationwide over the past few days.

He announced the elevation of the state alert level to the highest of the four-tier system.

"It was the president's decision, which he made in comprehensive consideration of various opinions, especially advice from infectious disease experts," the official said. 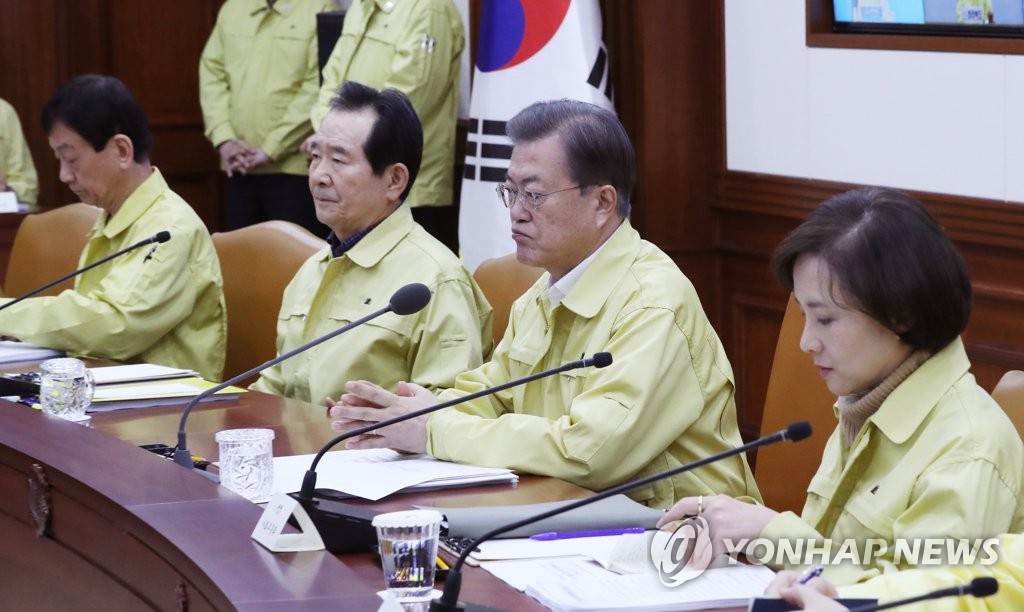 The education ministry has postponed the opening of the spring semester for all of the nation's schools a week to March 9.

Critics argue the Moon administration is to blame partly for the recent proliferation of the virus, citing its "belated" quarantine steps in general.

They are calling for an across-the-board entry ban for those coming from China, the origin of COVID-19.

Of concern is the impact on South Korea's traditional relations with the neighbor, which is its top trade partner, and potential effects on some other countries reportedly mulling over a similar entry ban for South Korean nationals amid fears of the deadly virus.