SEOUL, Feb. 24 (Yonhap) -- President Moon Jae-in appealed to the people Monday to have trust in his government's quarantine measures and join forces in the "dual" fight against the novel coronavirus and its economic impact.

"We should mobilize all national capabilities to prevent the spread of COVID-19," he stressed, speaking at the outset of his weekly meeting with his senior Cheong Wa Dae aides amid a sharp rise in the number of patients here. He invited 10 South Korean experts on infectious diseases to the session, including Peck Kyong-ran, head of the Korean Society of Infectious Diseases.

Moon said the anti-virus system of his administration and local governments is in full swing.

"I would like to ask the people to have confidence in our quarantine capabilities and medical system and to join forces in overcoming the current difficulty," he added. 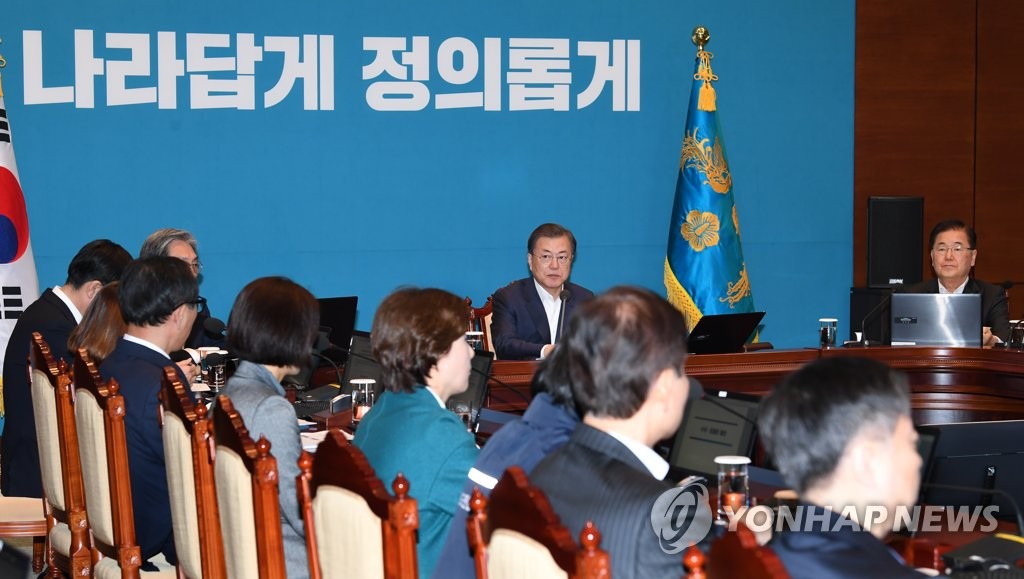 The president also assured the public that the government is in an emergency mode in the face of the "dual" challenges of quarantining people and dealing with the economic fallout. He stated again that South Korea is in an "emergency economic situation" due to the virus outbreak.

He called for a "bold injection" of government funds to help revive local economies hit COVID-19 cases, especially Daegu, 300 kilometers southeast of Seoul, and nearby areas.

He instructed the government to use reserve funds quickly and consider the allocation of a supplementary budget "if necessary," saying timing is of importance for such a policy step.

On Sunday, Moon announced the elevation of the state alert to the highest level of the four-tier system -- "red."

The education ministry has postponed the opening of the spring semester for all of the nation's kindergartens and schools by a week to March 9.

Critics argue the Moon administration is to partly blame for the recent proliferation of the virus, citing its "belated" quarantine steps in general.

They are calling for an across-the-board entry ban on people coming from China, the origin of COVID-19. Moon made no mention of the sensitive issue in his opening remarks during the latest Cheong Wa Dae meeting.

Of concern is the impact on South Korea's traditional relations with the neighboring country -- its top trade partner -- and potential effects on other countries reportedly mulling over a similar entry ban for South Korean nationals amid fears of the deadly virus.