SEOUL, Feb. 24 (Yonhap) -- The video for "Boombayah," the debut single of K-pop girl band BLACKPINK, topped 800 million views on YouTube, making the quartet the only K-pop act with two music videos that have achieved the feat, the band's management agency said Monday.

"With this, BLACKPINK got to own two music videos that have more than 800 million views as the first K-pop group," according to YG.

BLACKPINK is also the only K-pop band that has a music video with more than 1 billion YouTube views, a feat achieved by "Ddu-du Ddu-du" in November last year.

"Boombayah" was released in August 2016.

Following its last EP, "Kill This Love," dropped last year, the quartet will unveil a new album in the spring. 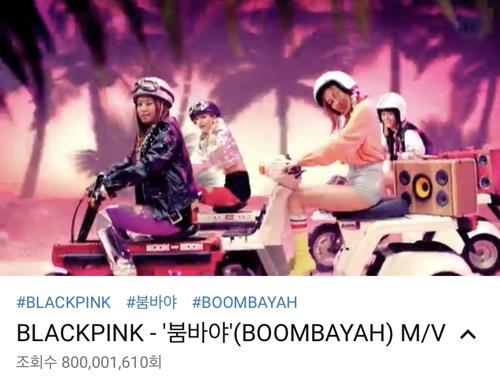