SEOUL, Feb. 24 (Yonhap) -- South Korea has reported one more death from the new coronavirus that emerged in China, bringing the nation's death toll to 7.

Over 110 people including nine medical staff, at the Daenam Hospital have been confirmed to be infected with COVID-19, with five victims of the potentially fatal illness reported or linked to the hospital, which has been in cohort isolation to stem further spread. 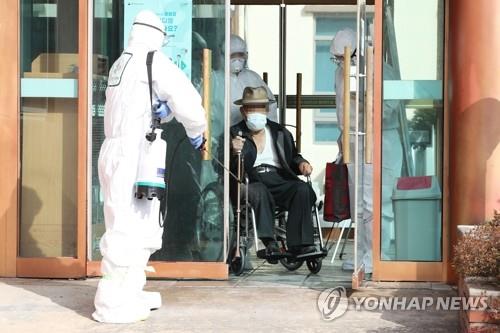 The Korea Centers for Disease Control and Prevention (KCDC) did not elaborate on whether the man, the 286th infected patient, had an underlying illness.

Seven people have died of the virus in just a few days, with five linked to the Cheongdo hospital.

The sixth victim of the virus was also a patient at the Cheongdo hospital, where the country's first COVID-19 fatality happened.

The 59-year-old man was confirmed to be infected last Wednesday and died at Dongguk University in Gyeongju, North Gyeongsang Province, while being treated for the disease.

The fifth death was reported in the southeastern city of Daegu. The 56-year-old woman died at Kyungpook National University Hospital while being treated for the novel coronavirus.