SEOUL, Feb. 24 (Yonhap) -- As a majority of the latest coronavirus infections are soaring among worshipers of a homegrown religious group of Shincheonji, South Korean churches and temples have been suspending public services amid growing fears over further spreading of the epidemic at crowed religious events.

South Korea reported a total of 763 confirmed cases of the COVID-19 virus as of Monday morning, with seven deaths.

The number has been skyrocketing since Tuesday last week, when the 31st patient, a follower of a Shincheonji church in the southeastern city of Daegu, tested positive for the virus. The 61-year-old Daegu citizen reportedly visited the church four times in total before and after feeling symptoms of the coronavirus infection. 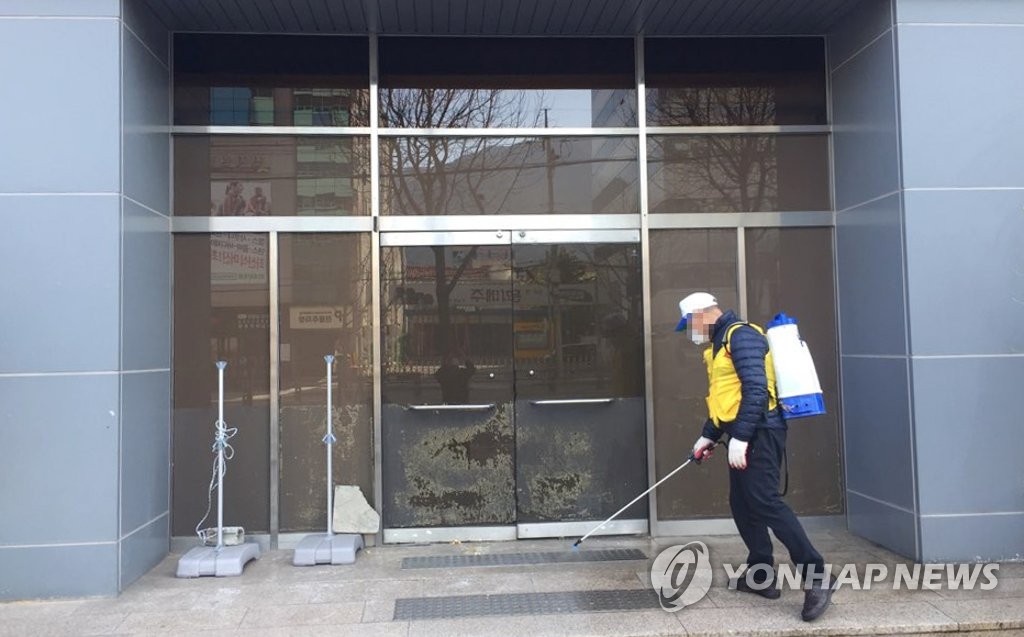 Consequently, more than half of the country's total coronavirus infections are linked to members of the group and people who came into contact with them in Daegu and the surrounding North Gyeongsang Province.

In an online announcement Sunday, the Shincheonji Church said it has shut down its 1,100 churches and annexed buildings nationwide, with all services and meetings canceled.

Moreover, the Catholic Church in South Korea is also at the center of the infections as 28 believers who recently made a group pilgrimage to Israel were infected with the new coronavirus.

The Catholic Times, the Daegu-based religious newspaper that arranged the pilgrimage tour, has shut down its offices in Seoul and Daegu, and put all its employees under quarantine.

The Catholic Archdiocese of Daegu and Diocese of Andong have decided to close their churches under their jurisdiction and suspend all Masses, meetings and events for weeks.

Other cathedrals and churches have also reduced or removed their weekly chapel services and asked their followers to stay at home and watch online Masses.

The epidemic also dealt a blow to the Protestant Church. Earlier in February, Myungryun Church in central Seoul replaced all their services with recorded ones after coronavirus patients were confirmed to have attended.

Myungsung Church, one of the biggest Presbyterian churches in the world, said six of its church members, including one pastor, have been in self-quarantine after having attended a funeral held at a hospital in the southeastern county of Cheongdo weeks ago.

The hospital is one of the two clusters of the latest massive infections as five out of seven deaths are from there.

The church, located in eastern Seoul, said the suspected patients have not yet been showing symptoms of the coronavirus infections. But it said it has preemptively closed all facilities and canceled weekday services.

In the southern port city of Busan, all buildings and facilities of Onchun Church have been shut down for at least two weeks after eight patients were found to be related to members of the church over the weekend.

Yeouido Full Gospel Church in Seoul, the biggest Christianity church in South Korea, has suspended nearly all of mass activities, except regular services on weekdays and Sundays, set up thermal detectors at every entrance and strengthened disinfection measures.

The Buddhist community has also come up with preventive measures. The Jogye Order, South Korea's largest Buddhist sect, has requested its temples and shrines refrain from holding community services.

The Jogye Order has called off its public service, pilgrimage and meetings scheduled for Monday.