SEOUL, Feb. 24 (Yonhap) -- South Korea's legislative, judiciary, and administrative branches on Monday scrambled to ward off the spread of new coronavirus which forced state institutions to suspend and cut back their operations and events.

The National Assembly called off its plenary session and temporarily closed its main buildings, possibly for the first time, after it was discovered that a person infected with the coronavirus attended a parliamentary forum last week.

Judicial authorities called for the unprecedented postponement of non-urgent trials. Government ministries canceled and reduced the number of meetings, trips and press events and tightened entry procedures at state offices.

The country confirmed 231 new cases of the new coronavirus on Monday, raising the total number to 833. Two more deaths from the virus were reported, bringing the nation's fatalities to 8. 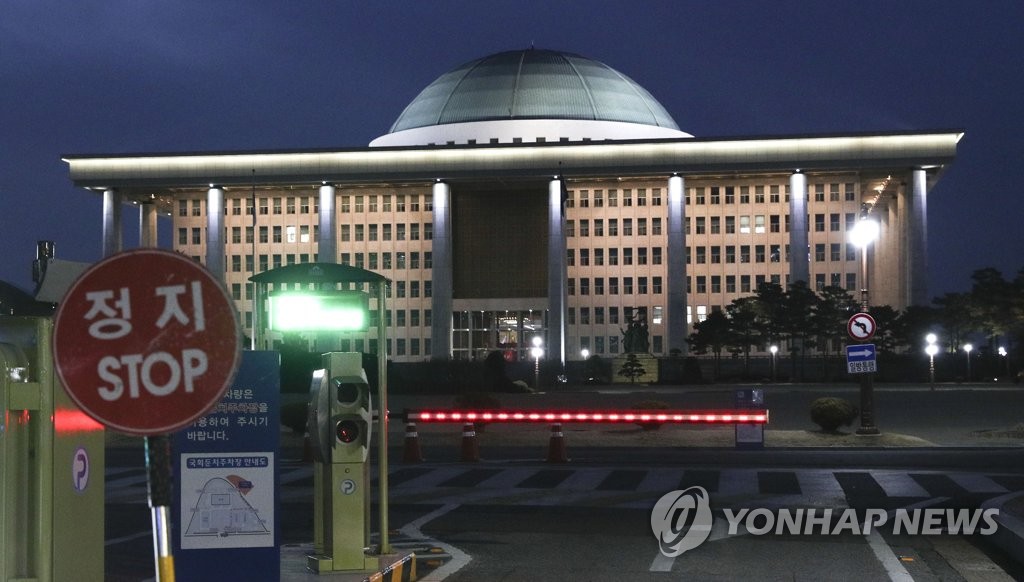 The ruling Democratic Party (DP) and the opposition United Future Party (UFP) agreed to cancel a parliamentary plenary session scheduled for Monday afternoon after it became known that UFP floor leader Shim Jae-chul had come into contact with a patient and was to take a test for COVID-19.

The National Assembly was scheduled to convene an interpellation session with Prime Minister Chung Se-kyun and other Cabinet members over political and national security issues.

On Saturday, Ha Yun-su, president of the Korean Federation of Teachers' Associations, was quarantined at a Seoul hospital after being confirmed to have gotten infected through contact with his wife.

Ha attended a forum at the National Assembly last Wednesday. Shim and two other UFP lawmakers who participated in the conference were tested Monday, party officials said.

Late Monday, health workers began to sterilize the National Assembly's two main buildings, which will be closed until Wednesday morning. Assembly officials said it may be the first time for the buildings to be shut down for emergencies.

UFP chairman Hwang Kyo-ahn suspended his planned meetings with small business owners and merchants in Jongno, central Seoul, where he will run in the April 15 parliamentary elections. He sat by Shim during a daily party meeting early Monday.

The Agriculture, Food, Rural Affairs, Oceans and Fisheries Committee delayed its sessions scheduled for early this week after one of aides to the committee's chairman was known to have contacted a confirmed patient. The aide tested negative, the chairman's office said. 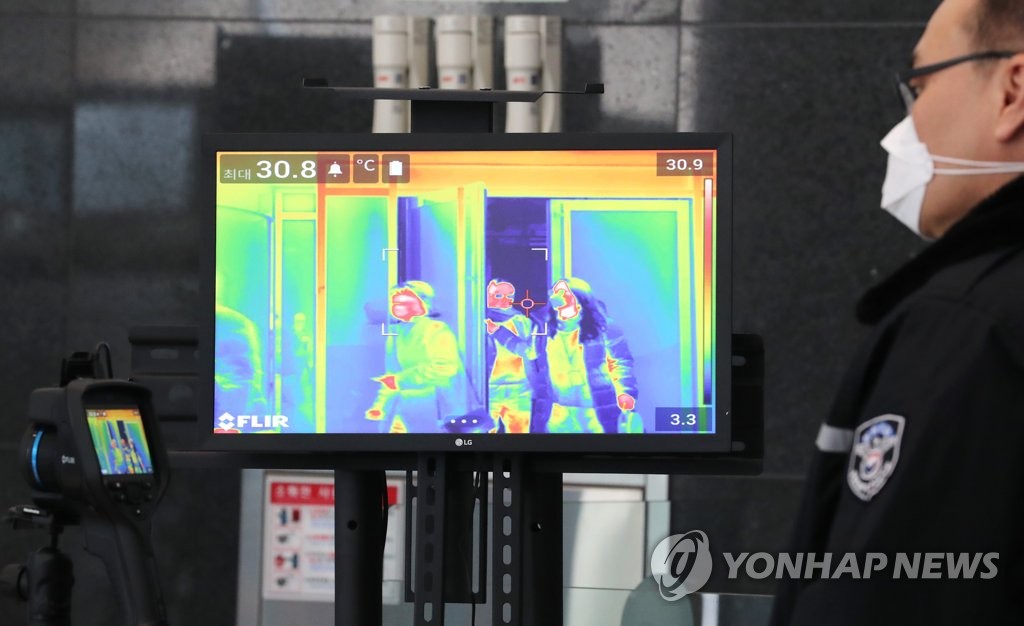 In the judiciary, Cho Jae-youn, chief of the National Court Administration (NCA), called on courts across the country delay or reschedule trials except urgent ones involving arrests, injunction and suspension of execution.

It is the first time that the judiciary administrative body under the Supreme Court recommended a measure close to an overall adjournment.

The request may affect ongoing abuse of power trials on former Justice Minister Cho Kuk and former Supreme Court chief Yang Seung-tae, though the decision is up to court justices.

The NCA is also considering cancelling a meeting of court chiefs from across the country slated for March 6. It also set up a virus crisis response taskforce which will hold its first meeting Tuesday.

The fast spreading of the novel virus is disrupting the operations of various government ministries.

The unification ministry cancelled a tour program of the truce village of Panmunjom in the Demilitarized Zone (DMZ). The ministry had planed to hold the pilot event for new ways of Panmunjom tour from Wednesday to Friday for Seoul-based diplomats, people displaced from their homes in North Korea, and separate families divided across the border. The ministry said the event will be delayed due to the coronavirus.

The ministry also postponed the opening ceremony for a center in Seoul aimed at promoting harmony between North Korean defectors and local residents. The event, scheduled for late March was delayed to until after April. 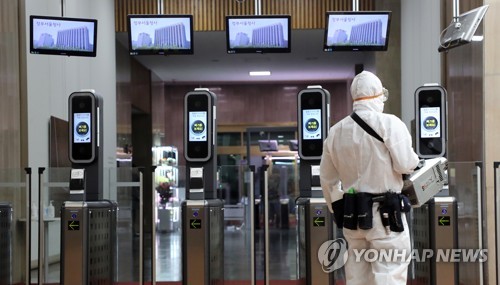 Some entrances without such devices were blocked. Sterilization will be conducted more frequently and some affiliated facilities, such as daycare centers and gyms, were closed.

The Ministry of Personnel Management directed government agencies to investigate whether their members have visited areas affected by the deadly virus domestically and abroad and take immediate measures if suspected cases are found.

The interior ministry decided not to hold regular media briefings this week and the Ministry of Oceans and Fisheries postponed press meetings over lunch and dinner.

The Cultural Heritage Administration announced plans to shut down some museums, memorial halls and other indoor facilities at royal palaces and tombs from Tuesday to March 8. 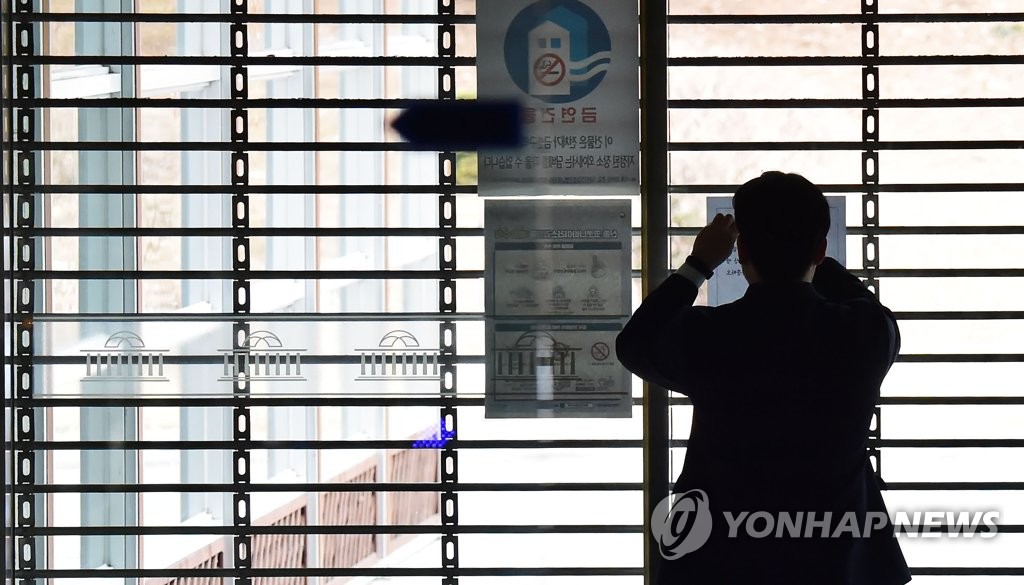