SEOUL, Feb. 24 (Yonhap) -- Three minor parties based in the southwestern region merged on Monday to launch a new middle-of-the-road party ahead of the April 15 parliamentary elections.

The leaders of the Bareunmirae Party (BP), the Party for Democracy and Peace (PDP) and the New Alternative Party (NAP) declared their union, vowing to "end the nation's antagonistic politics stemming from dominance by the two major parties."

"The united centrist party takes its first step in the support of the people," they said in a joint statement. "We will end the chain of old ideological politics and regionalism and go hand in hand on a path of the politics of pragmatic and moderate reform," they added.

The new party, whose name is translated as Party for People's Livelihoods, will be the third-largest group in the National Assembly with 20 lawmakers -- nine from the BP, seven from the NAP and four from the PDP.

It will be co-headed by Kim Jong-hwa from the BP, You Sung-yop from the NAP and Park Joo-hyun named by the PDP.

The merger is the latest in a series of realignments of political parties ahead of the April 15 general elections.

On Sunday, Ahn Cheol-soo, who co-founded the BP in February 2018, launched his own party tentatively named the People's Party in English. Another BP co-founder, Yoo Seong-min, and his allies had joined the UFP.

The new Party for People's Livelihoods has its support base in the liberal strongholds of Gwangju and the two Jeolla provinces. But it is expected to face a tough challenge in the April elections, as President Moon Jae-in and the ruling DP are receiving strong support from voters in the southwestern region. 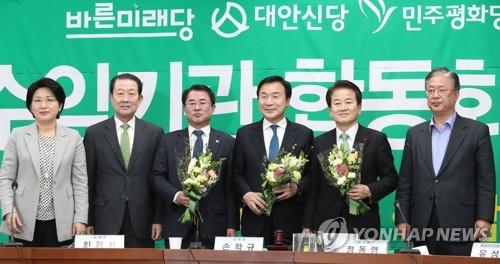