SEOUL, Feb. 24 (Yonhap) -- Prime Minister Chung Sye-kyun on Monday stressed the importance of speedy preemptive anti-coronavirus measures in order to halt its spread from the cluster in Daegu and nearby areas.

Speaking to reporters, he said he would visit the city, a three-hour drive southeast from Seoul, on Tuesday shortly after attending a weekly Cabinet meeting.

He pointed out that South Korea had initially focused on blocking the inflow of the virus from foreign nations.

But situations have entered a new phase with the confirmation of hundreds of patients in "specific" areas and groups starting in the latter half of last week. 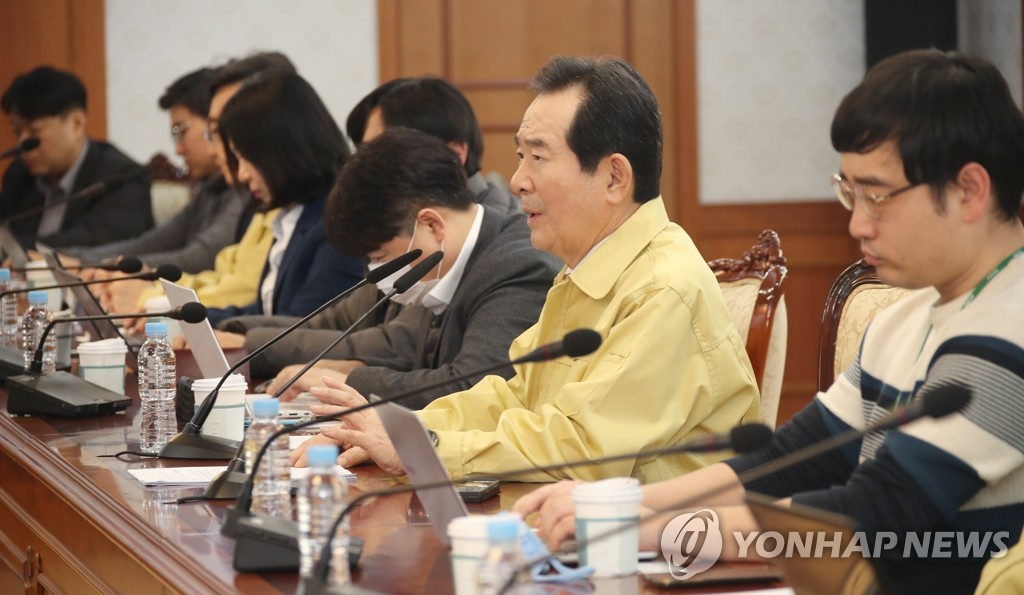 He was referring to a Daegu church of a minor Christian sect, known as Sincheonji, and a hospital in Cheongdo adjacent to the country's fourth-largest city by population.

A 61-year-old Sincheonji follower, dubbed by media as "Patient No. 31," is known to have attended crowded worship services at the church and contacted many people for several days before testing positive. Many Sincheonji members were also confirmed to have visited the Cheongdo hospital as well.

"Preemptive measures are necessary to prepare for the possibility of (the virus) spreading across the nation," Chung said.

It's proliferating "considerably fast" and is highly contagious, although its fatality rate is low, he noted.

"The government and the quarantine headquarters have agreed on the need to respond with a speed fight," he added.

The prime minister said the outbreak in Daegu and North Gyeongsang Province is not a local problem but a national one, adding the government will mobilize "all pan-national capabilities" there.

Chung said he will visit Daegu on Tuesday and "spearhead" quarantine measures in person.

Meanwhile, South Korea will put a cap on the exports of face masks amid a shortage of the products at home attributable to an explosive rise in demand, according to Chung.

He did not specify a quota, just saying that the government will make sure that lots of locally produced face masks will be used here.

The government will ensure medical workers are supplied with the masks they need, he said, adding such measures will be included in a public notification to be approved at this week's Cabinet meeting.

He expressed a negative view on the likelihood that South Korea will be forced to postpone the April 15 general elections if the epidemic continues and worsens.

"I don't think (South Korea) has any cause yet to put off its general elections," he said. "That's because it couldn't afford to leave the legislature in a state of absence."

Under the country's national election law, its president is empowered to postpone a poll in the case of natural disasters and other "unavoidable" situations.