SEOUL, Feb. 24 (Yonhap) -- A U.S. Forces Korea (USFK) family member living in the southeastern city of Daegu has been confirmed to have the new coronavirus, USFK said Monday, marking the first case among a person related to the American military stationed here.

South Korea's Centers for Disease Control and Prevention (KCDC) informed USFK that the 61-year-old female had tested positive for COVID-19, USFK said in a release.

The patient is a U.S. national, an official said, adding that it was not immediately known how she became infected with the virus. Coronavirus cases have risen massively in Daegu in recent weeks.

"USFK has raised the risk level to 'high' for USFK peninsula-wide as a prudent measure to protect the force," the command said.

The patient visited Camp Walker's Post Exchange in Daegu on Feb. 12 and 15, so South Korean and the U.S. health professionals have been conducting contact tracing to determine whether any others may have been exposed, according to USFK.

"USFK encourages all personnel to continue to practice strict proper hygiene procedures as the best ways to prevent the spread of viruses and protect the USFK population," it noted.

South Korea has seen a sharp rise in the number of infections linked to a religious group in Daegu and a hospital in its adjacent county of Cheongdo since last week. As of 4 p.m. on Monday, a total of 833 cases had been confirmed in the country, including eight deaths.

Accordingly, the U.S. military has limited all service members' non-essential travel to, from and around Daegu, banned visits to several locations in the city, and closed several child-related facilities at its garrison in Daegu to mitigate the risk of coronavirus infection among its population. 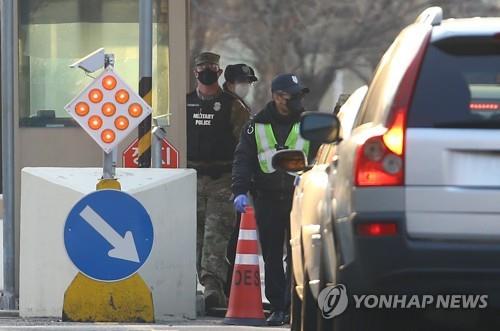