WASHINGTON, Feb. 24 (Yonhap) -- U.S. Defense Secretary Mark Esper said Monday that South Korea can and should contribute more to its defense in terms of financial contributions to the upkeep of American troops on the peninsula.

Esper made the remark during a joint press conference with South Korean Defense Minister Jeong Kyeong-doo after a bilateral meeting at the Pentagon. He also warned that South Korean employees at American military bases will be furloughed unless a deal is reached in time. 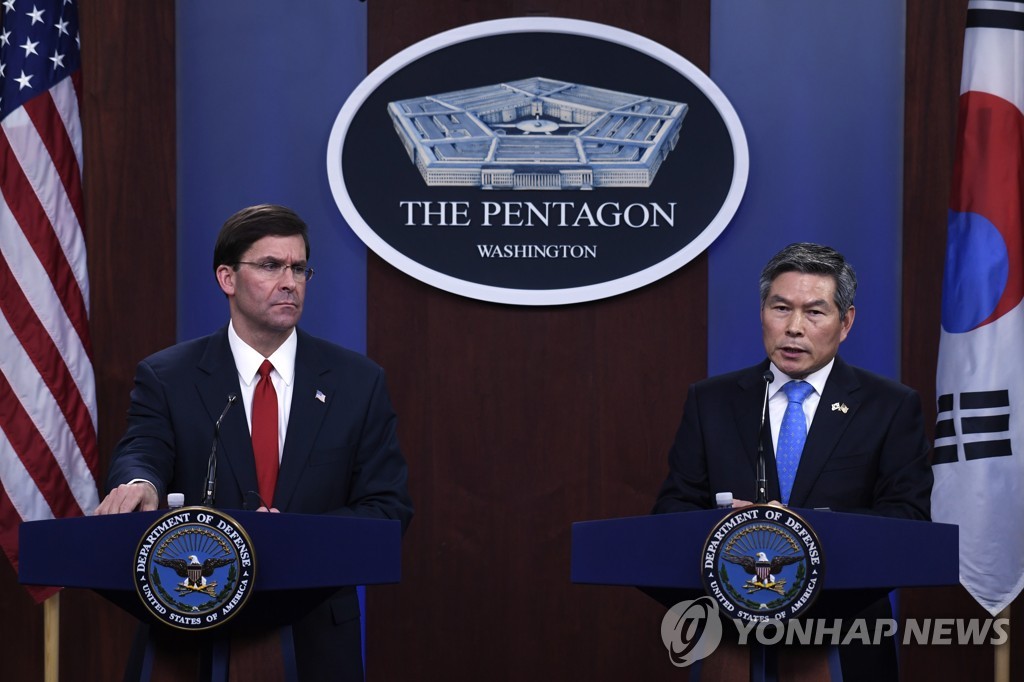 The two countries have been negotiating a new Special Measures Agreement to split the cost of the U.S. troop presence in South Korea, with Washington demanding a significant increase in Seoul's contributions.

"Shouldering the cost of our common defense cannot fall disproportionately to the American taxpayer," Esper said. "As such, we must find a more sustainable and equitable means of sharing the costs of our combined defense, with the Republic of Korea."

"As a global economic powerhouse and an equal partner in the preservation of peace on the peninsula, South Korea can and should contribute more to its defense," Esper said.

The U.S. has argued that South Korea should cover other costs too.

"The current Special Measures Agreement captures only a portion of the overall cost associated with the United States' defense of South Korea," Esper said. "The United States believes it should cover more. While much work needs to be done to bridge the gap between our two sides on the 11th SMA, we had a productive and candid discussion on this topic today. The United States remains fully committed to reaching a mutually beneficial and equitable agreement that will strengthen the alliance and our combined defense long into the future."

The U.S. defense secretary added that if no deal is reached, the 9,000 South Korean workers on U.S. military bases will be furloughed in April as planned.

Jeong acknowledged that differences between the two countries remain and expressed hope for a speedy resumption of the negotiations.