The government, the ruling Democratic Party (DP) and the presidential office decided to thoroughly implement stepped-up "containment" measures in Daegu and North Gyeongsang Province, where infections of COVID-19 have shot up in recent days.

As the word "containment" sparked speculation that the government may consider a lockdown in Daegu, the DP hurried to stress that the maximum containment measures mean beefing up quarantine efforts, not an isolation.

"(As quarantine-related jargon), the containment does not mean an imposition of regional blockade," Rep. Hong Ihk-pyo, DP spokesman, said in a press briefing.

He dismissed media reports as not true that say the government seeks to isolate Daegu and the province like China put its central city of Wuhan, the epicenter of the virus, under lockdown.

The government designated Daegu and its nearby county of Cheongdo last week as "special care zones" to better cope with the fast spread of the disease.

Two clusters of infections -- at a branch of a religious sect in Daegu, a city of 2.5 million, and a hospital in Cheongdo -- have continued to expand, accounting for almost three-quarters of the total cases in the country. 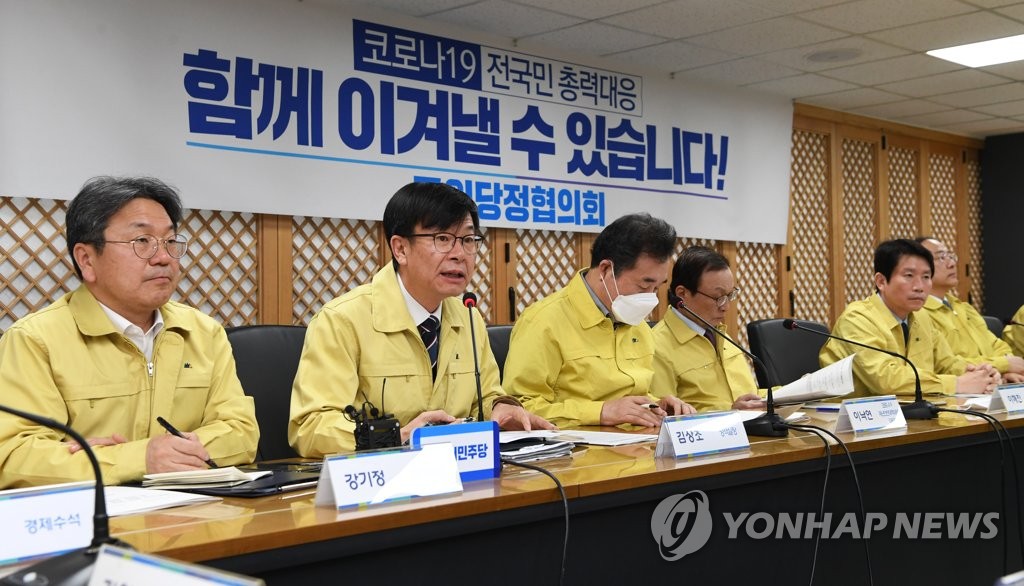 The participants also agreed to secure reserve funds to quickly support small business owners hit by the virus outbreak and create a supplementary budget as soon as possible.

President Moon Jae-in instructed government officials Monday to draw up an extra budget over the virus that experts say could amount to more than 10 trillion won (US$8.27 billion). The government's 2020 budget is already a record 512.5 trillion won.

The government will also announce a set of comprehensive measures to minimize the impact of the virus outbreak this week.

The participants decided to request that Moon consider issuing an emergency finance decree if the operation of the National Assembly hits a snag, Hong said.

Under the Constitution, the country's president can issue an emergency presidential order when acute support measures are deemed necessary to deal with serious financial and economic situations.

To stabilize the supply of face masks, the participants decided to require that 50 percent of daily production be used for public purposes.

The move will enable the government to provide face masks to people stably through local governments, not via commercial distribution channels.

Face masks will be also provided free to the underprivileged and health workers in Daegu and Cheongdo.

The government said it will consider taking legal actions against outdoor rallies that occur despite local governments' warnings.

Public criticism mounted as a group of Protestant followers, led by conservative pastor Rev. Jun Kwang-hoon, pushed ahead with a massive rally at Gwanghwamun Plaza in central Seoul over the weekend despite the city government's warning.

"The move does not target a specific rally, but administrative authorities will actively handle (rallies) if they are deemed to have risks of spreading COVID-19," Hong said. 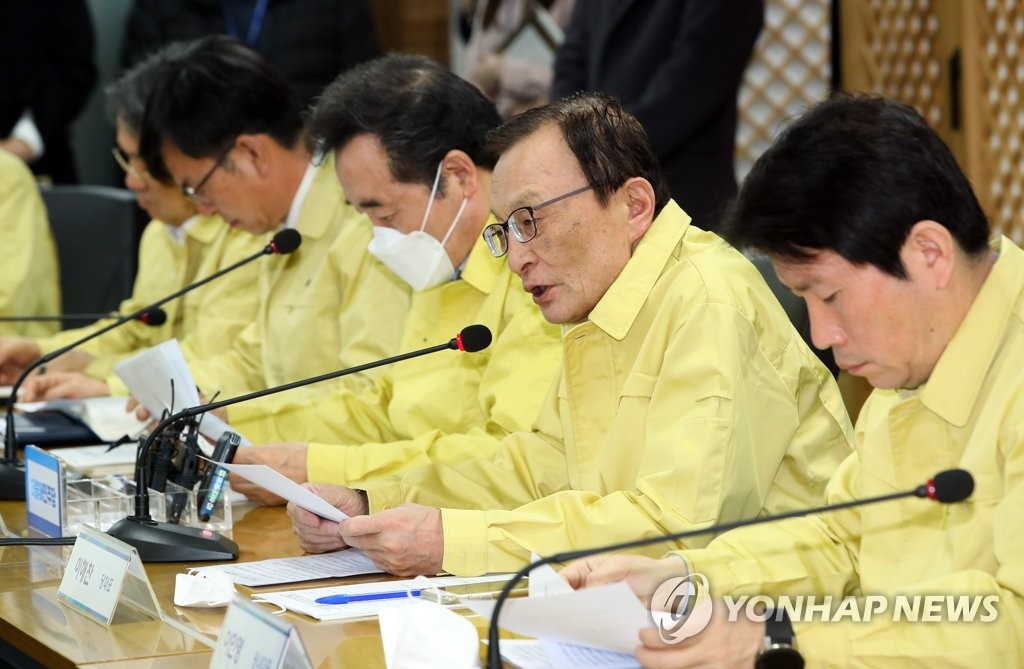