SEOUL, Feb. 25 (Yonhap) -- The Seoul city government on Tuesday banned all gatherings of the Shincheonji Church of Jesus, a minor Christian sect believed to be responsible for a surge in coronavirus infections in the country.

The city government has been informed there are 263 Shincheonji-related locations in the city and has shuttered and disinfected 188 of them, an official told reporters.

South Korea has reported 893 COVID-19 cases and nine deaths as of Tuesday. More than half of infections are linked to the religious group.

"We are still investigating 66 other sites. It is difficult to verify whether they belong to Shincheonji or not," Yoo Yeon-sik, an official in charge of cultural affairs, told a press briefing.

The shadowy group disguises many of its facilities as non-religious ones.

"Since there are places difficult to identify, we ban all assemblies and ceremonies related to Shincheonji across Seoul as of today," he added.

Violators of the executive order could be fined up to 3 million won (US$2,475).

Earlier in the day, the health authorities said Shincheonji agreed to provide a complete list of its members and their contact numbers to the government.

Yoo said the city government will further investigate those facilities once it receives the list. 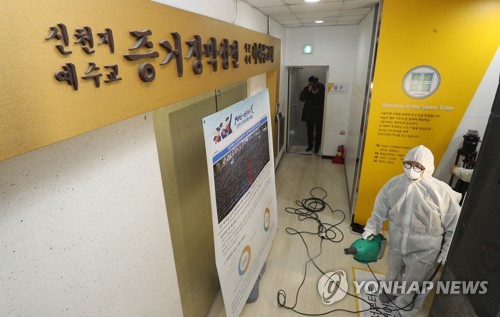