Lee received 474.8 billion won (US$391 million) in dividends last year, almost unchanged from a year earlier, according to the data from industry tracker CEO Score.

The bulk of Lee's large dividend income came from Samsung Electronics Co., the group's flagship and the world's top smartphone maker, in which Lee holds a 4.18 percent stake.

Lee, who has been hospitalized since 2014 after suffering a heart attack, has kept the title of the top dividend income earner for 11 straight years. 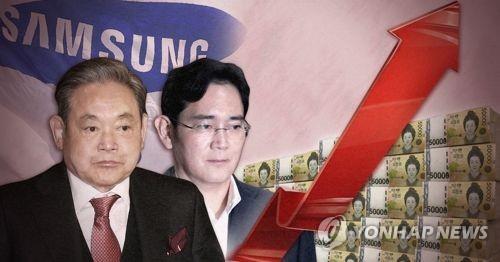 Lee Jae-young, the elder Lee's only son and heir apparent, came next with 142.6 billion won. The younger Lee serves as the vice chairman of Samsung Electronics.