The 23-year-old soldier at Camp Carroll is currently in self-quarantine at his off-base residence, according to USFK. Chilgok, about 220 kilometers southeast of Seoul, is near the city of Daegu, where a coronavirus outbreak has spread rapidly in recent days.

It is the first time that a USFK service member has been infected with the virus, though a 61-year-old "widowed USFK dependent" residing in Daegu tested positive for COVID-19 on Monday.

It was not immediately clear how he contracted the virus. Of the total 1,146 confirmed cases in South Korea, 944 patients, more than 82 percent, are residents of Daegu and the surrounding North Gyeongsang Province, according to official statistics.

South Korean and U.S. health officials are tracing the service member's contacts to determine what exposure others may have had to him, as he visited Camp Walker in Daegu on Monday and stayed at Camp Caroll from Friday to Tuesday, according to USFK.

"USFK is implementing all appropriate control measures to help control the spread of COVID-19 and remains at risk level 'high' for USFK peninsula-wide as a prudent measure to protect the force," USFK said in a release.

It has also limited all service members' off-installation travel, as well as non-mission essential in-person gatherings and meetings, and implemented a tougher process for accessing garrisons across the country.

As of 9 a.m. Wednesday, South Korea had reported 1,146 confirmed cases of the new virus. 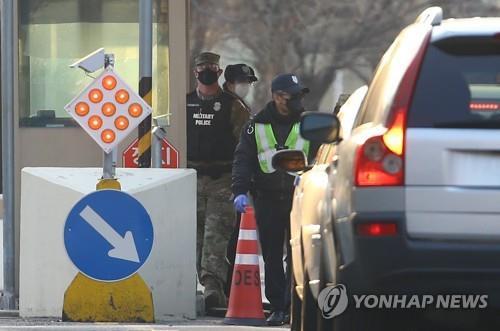