SEOUL, Feb. 26 (Yonhap) -- Seoul's police said Wednesday they will ban a conservative civic group critical of the Moon Jae-in administration from holding a rally in the heart of Seoul this weekend, saying any pubic gathering will pose a threat to the nation's ongoing efforts to halt the coronavirus outbreak.

The conservative group, which calls itself the "Pan-national alliance for Moon Jae-in's resignation," has vowed to organize a large-scale street demonstration on Gwanghwamun Square in downtown Seoul on the occasion of March 1 Independence Movement Day, which falls on Sunday.

But the Seoul Metropolitan Police Agency said it has notified the alliance of its decision to ban the Sunday rally, noting rallies are prohibited in central Seoul, including Gwanghwamun Square, Seoul Station and Seoul Plaza, to stop the spread of COVID-19. 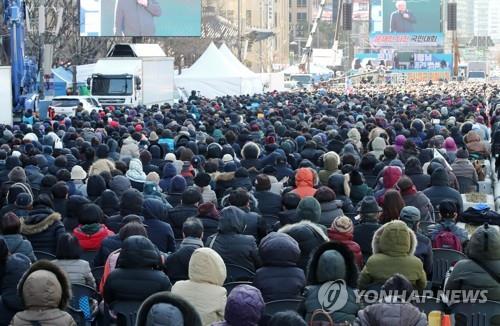 The police agency said it has concluded that any gatherings of many people in places designated by the municipal government as a no-rally zone will pose a direct risk to public well-being.

It said the possibility of coronavirus carriers, including asymptomatic patients, attending the outdoor rally cannot be ruled out, amid a steady rise in COVID cases in Seoul and elsewhere.

South Korea confirmed 1,146 coronavirus patients and 11 deaths as of 9 a.m. Wednesday, with 44 cases reported in Seoul.

The conservative alliance, led by Jun Kwang-hoon, the chairman of the Christian Council of Korea, had already stirred up controversy by pushing ahead with a massive anti-government rally in central Seoul over the weekend in disregard of the central and municipal governments' ban on outdoor rallies as part of emergency measures to curb the coronavirus infections.

Jun was detained on Monday after a local court issued an arrest warrant for him on charges of violating the election law by asking participants in a street rally last year to support a specific political party in April's general election. The pastor vowed to push ahead with the March 1 rally before being sent to a detention center.

The police agency said last Saturday's rally by the conservative alliance was problematic, because some participants didn't wear face masks and shouted slogans in a closely seated crowd.

Earlier, the Seoul Metropolitan Government banned urban rallies under the Infectious Diseases Control and Prevention Act, under which violators can be punished with a fine of up to 3 million won (US$2,460).

The Seoul police agency said it can forcibly disperse rally participants under the Assembly and Demonstration Act, which stipulates a prison sentence.

The agency also said it will conduct a thorough investigation if the conservative alliance pushes ahead with the March 1 rally.

The alliance has frequently hosted anti-Moon rallies in central Seoul since last fall. The March 1 Independence Movement against Japan's colonial rule of Korea began in Seoul on that day in 1919 and spread throughout the country.