(ATTN: REWRITES throughout)
By Kim Seung-yeon

SEOUL, Feb. 27 (Yonhap) -- A planned meeting in London between the foreign ministers of South Korea and Britain was called off at the last minute due to a scheduling problem on the British side, diplomatic sources said Thursday.

Foreign Minister Kang Kyung-wha had been scheduled to hold talks with her British counterpart, Dominic Raab, on Wednesday (London time) as part of her five-day trip to Europe to attend conferences on human rights and disarmament.

But Raab called off the meeting citing "personal circumstances," a source said.

It is rare for previously announced one-on-one ministerial talks to be canceled. Kang instead met with Health Minister Matt Hancock and Nigel Adams, a minister of state at the British Foreign Office.

The cancellation came amid criticism that Kang is making an overseas trip for non-urgent matters at a time when a number of countries have been slapping travel restrictions on South Korea over concerns about the new coronavirus.

South Korea is one of the countries that have been hit hardest by the outbreak of COVID-19, which originated in Wuhan, China, in December. As of early Thursday, South Korea's infection tally had reached nearly 1,600, with 13 fatalities.

At least 30 countries have either slapped entry bans or toughened quarantine processes against South Koreans and visitors from the South. Many countries have raised their travel alerts for South Korea, advising their people not to make trips here.

A foreign ministry official said earlier that ministerial overseas trips provide a good opportunity for Seoul to let other countries know about its situation and to learn about other countries' circumstances so as to better cope with the disease. 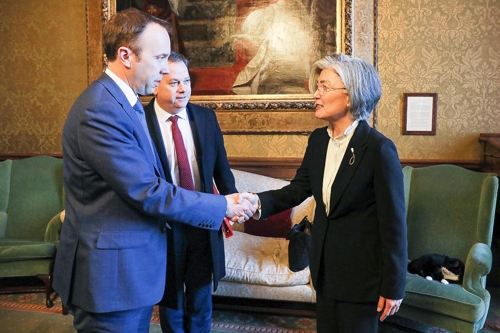