SEOUL, Feb. 27 (Yonhap) -- Defense Minister Jeong Kyeong-doo has said that the cancellation of a single combined exercise between South Korea and the United States would not affect their joint readiness posture, according to his ministry.

He made the remarks while visiting U.S. National Defense University on Wednesday (Washington time), hours before the announcement by the two sides of the decision to indefinitely postpone their combined command post training slated for March due to concerns over the new coronavirus.

"Different from the past, we are capable of staging exercises in an adjusted manner without affecting our posture by maximizing modernized weapons systems, operational employment systems and the C4I systems," Jeong said in an answer to a question by a student. C4I means command, control, communications and computers and intelligence systems.

"I don't believe that the cancellation of a single exercise or training weakens the military readiness posture," Jeong said, pointing to what he calls the "staunch and fully developed" alliance between the two sides.

It is the first time that Seoul and Washington have postponed their combined training due to health-related issues, though they have previously modified or canceled some drills to support diplomacy involving North Korea.

"All military service branches of South Korea and the U.S. have carried out combined exercises in an adjusted manner, but the number of drills jointly staged remains the same as that in the past and their strength is even greater than before," Jeong said, stressing that they successfully detected all missile firings by North Korea last year and have presented a watertight posture.

South Korea has seen a drastic surge in COVID-19 cases over the past week. On Thursday morning, the Korea Centers for Disease Control and Prevention (KCDC) reported an additional 334 cases, bringing the total to 1,595 cases and 13 deaths.

The total includes 20 service members and one Army civilian worker.

Around 9,500 soldiers are currently in quarantine as a preventive step. USFK also reported the first coronavirus case among its troops on Wednesday. 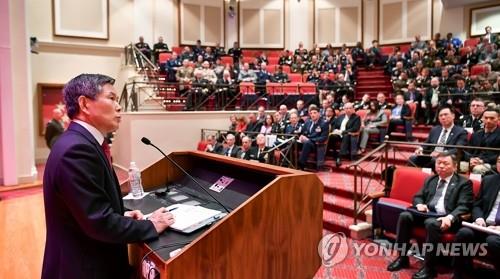 "There exists a gap in our target figures, but we will resolve this matter based upon our alliance spirit. I ask for your support," Jeong told the audience, while noting Seoul's contributions to U.S. forces' presence on Korean soil outside the framework of the agreement, such as the US$9 billion paid for the construction of Camp Humphreys in Pyeongtaek, 70 kilometers south of Seoul.

The minister also mentioned the significance of trilateral security cooperation between Seoul, Washington and Tokyo to respond to nuclear and missiles threats posed by North Korea.

"Last year, South Korea temporarily suspended the decision to end the General Security of Military Information Agreement (GSOMIA) with a broader and strategic view and has been in talks with Japan for its withdrawal of export curbs against South Korea," Jeong said. "I hope the U.S. government plays a proactive role on Japan for the continued development of the trilateral cooperation."

As for China, Jeong cited "the need to maintain a cooperative, friendly relationship," while noting that he is "well aware of concerns" by some experts over the bilateral ties.

Jeong is in the U.S. for a six-day trip that began on Sunday for talks with his U.S. counterpart, Mark Esper, and meetings with U.S. veterans of the 1950-53 Korean War and other key figures.

Meanwhile, the defense chief visited U.S. Marine Corps Base Camp Pendleton in California on Wednesday (U.S. time) to meet with U.S. soldiers and veterans of the 1950-53 Korean War, according to the ministry.

During the war, the 1st Marine Division took part in several key battles, including the Battle of Incheon which resulted in a decisive victory and strategic reversal in favor of the U.N. Command.

This year marks the 70th anniversary of the outbreak of the Korean War. 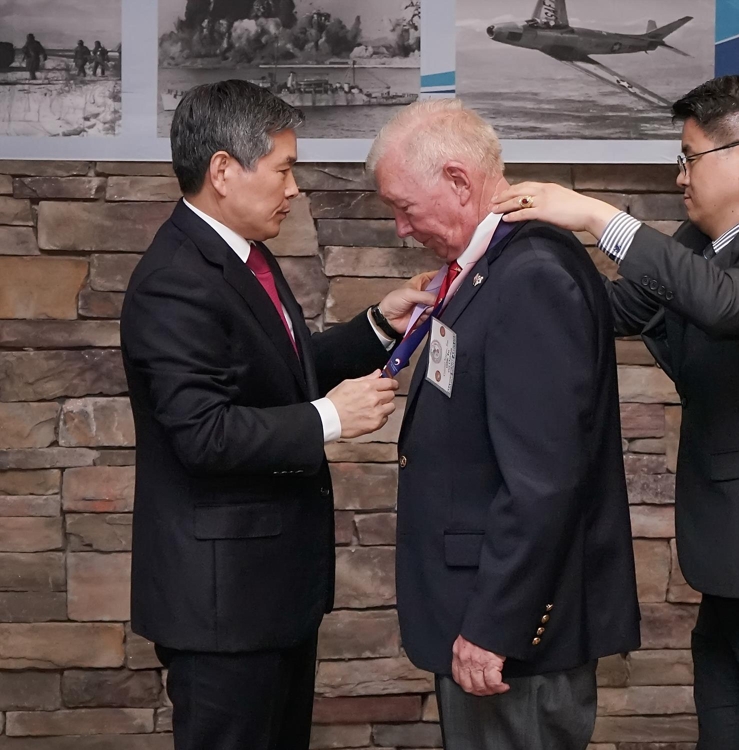