SEOUL, Feb. 27 (Yonhap) -- Many big Protestant churches in Seoul have still remained reluctant to suspend their Sunday services this coming weekend, raising concerns over possible mass infections of the coronavirus.

Yeouido Full Gospel Church in Seoul, the biggest Protestant church in South Korea with 560,000 followers, said Thursday that it will hold the upcoming Sunday services as scheduled, but downscale the seven-session program to five sessions.

It stopped holding weekday public events and gatherings of its worshipers this week.

The church said it will donate 1 billion won (US$823,000) to the southeastern city of Daegu, which has been struggling with a majority of South Korea's COVID-10 virus infections.

Other mega-sized churches, including Kwanglim Methodist Church and Sarang Community Church in southern Seoul, which have 80,000 and 90,000 believers, respectively, have not yet announced plans to cancel their Sunday services.

But some Protestant churches have been moving swiftly to scale back or halt their gatherings in order to join the nationwide effort to prevent further COVID-19 infections.

Myungsung Church, located in eastern Seoul, has closed its facilities and suspended all activities and meetings, including services, after two of its members, including a pastor, were confirmed to be infected with the virus. The church is one of the biggest Presbyterian churches in the world with 80,000 followers.

The pastor attended a church service on Feb. 16 with roughly 2,000 participants. The church said 215 followers who had close contact with him have gone through virus testing, with 142 of them having tested negative.

Somang Presbyterian Church, located in the south of the capital city, said earlier it would suspend all public gatherings, including Sunday services.

The decision coincided with the confirmed virus infection of one of its members on Tuesday. The member visited the church on Feb. 16.

Besides such large churches, the National Council of Churches in Korea (NCCK), released a statement calling on leading churches to do their part to help stem the spread of coronavirus.

"Churches should not be the cause of COVID-19's spread in the country," the NCCK said. It pointed out that church services have already been cited for contributing to the spread in Daegu, where the bulk of infection cases are being reported.

It then urged local churches, for the time being, to use various online platforms to hold services and conduct prayer meetings for worshipers.

Reflecting the divide within the Christian community in regard to religious gatherings, Culture Minister Park Yang-woo on Thursday asked the Protestant Church to cooperate in the government-led preventive measures.

"Many public gatherings take place in religious facilities, so the religious community has to take action more thoroughly," he said during a visit to the Seoul headquarters of the Korean Methodist Church. "As preemptive measures, it is necessary to suspend, cut down or postpone public events and replace services with online ones." 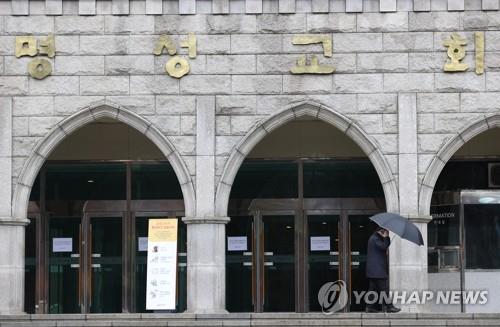 A majority of recent infections were from religious groups, including the homegrown Shincheonji Church of Jesus and other Christian churches.

Shincheonji said it has shut down all of its facilities, while the Catholic Church in South Korea has also suspended all public Masses across the country.

The South Korean government raised the virus alert level to the highest grade last week, requesting the public refrain from having outdoor activities.