SEOUL, Feb. 27 (Yonhap) -- South Koreans afraid of the new coronavirus are increasingly staying away from public places, wreaking havoc for small businesses nationwide and driving many of them to the brink of their worst-ever crisis.

Diminished sales are a particularly serious problem in Daegu, about 300 kilometers southeast of Seoul, and the surrounding North Gyeongsang Province -- the two areas hardest hit by the COVID-19 outbreak. 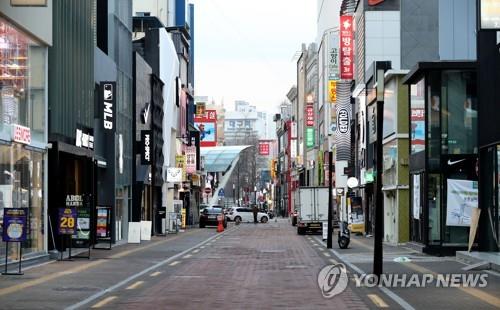 Streets in Daegu and North Gyeongsang cities and towns are almost empty throughout the day, with some media outlets calling them "ghost towns."

Dongseongno Street is usually visited by about 500,000 people a day, making it Daegu's most popular shopping district -- but these days it is nearly deserted, as municipal authorities have asked citizens to stay home to combat the coronavirus outbreak.

According to government data released Thursday morning, Daegu and North Gyeongsang accounted for 1,338 of the nation's 1,595 confirmed coronavirus cases. There have been 55 cases reported in Seoul.

Faced with the disappearance of customers, a growing number of small businesses in the region and elsewhere, including restaurants, shopping malls and other retail stores, are choosing to close temporarily.

At a pork restaurant in Nam Ward of Pohang, just east of Daegu, not a single customer was found at 7 p.m. Wednesday, the eatery's busiest hour of the day in ordinary times. Prior to the virus outbreak, the restaurant used to be fully packed with lovers of "samgyeopsal-gui," or grilled pork belly, every evening.

"I have no choice but to endure for now. There is no choice," said the restaurant owner. "There is no one to complain to because all business owners around me are suffering this hardship. I can hardly sleep when I think of labor costs and rent," he sighed. 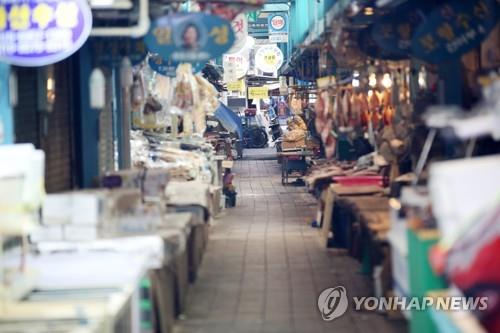 A nearby restaurant put up a temporary closure notice on its door.

A Pohang woman temporarily shut her cafe in Buk Ward last Sunday after sales dived to less than one tenth of the ordinary weekend level the previous day.

"I decided to close the cafe for the time being because I couldn't even cover labor costs," she said, adding that she had to let four part-time workers go.

Gwangju, a metropolis 330 km south of Seoul, has so far confirmed just nine COVID-19 cases, but the city's small businesses have also been badly affected.

An employee at a large restaurant on Geumnamno Street in the center of Gwangju told Yonhap News on Wednesday it had had some customers at lunchtime but dinner sales had plummeted.

"Group reservations have all been canceled for the rest of this month," the employee said. 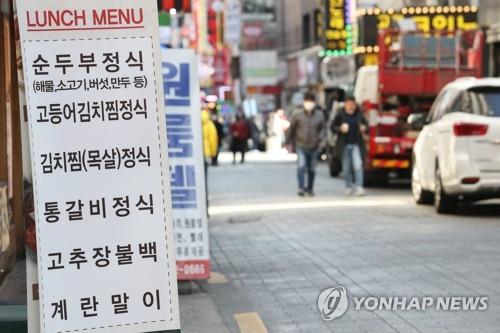 The absence of dinner customers was echoed by restaurant owners in Seoul, Busan and other major cities nationwide.

A 48-year-old man who runs a sushi restaurant in Suwon, just south of Seoul, said the number of tables occupied by customers previously averaged 70 to 80 a day but it is difficult to fill 10 tables these days.

The man grumbled that an increasing food inventory is giving him a headache.

A 61-year-old woman surnamed Na who owns a clothing store in Gwangju's Geumnamno, said she opened her shop at 9:30 a.m. Wednesday but no one entered until 1 p.m.

"I asked my employee to stay home for the time being. I kept my store open but I don't know what to do next," she said.

A large number of self-employed merchants and private educational institute owners in Daegu and North Gyeongsang region, interviewed by Yonhap after their temporary business closures, said they are not sure if they can pay their monthly rents in time.

Self-employed people's worsening economic difficulties have also been reflected in the official statistics.

According to the Bank of Korea's Consumer Sentiment Index, released Tuesday, the outlook for household income among the self-employed was down by 8 points on-month to 87 in February.

It was the lowest figure since the 2009 global financial crisis. Even during the outbreak of Middle East respiratory syndrome in South Korea in June 2015, it only went as low as 94. 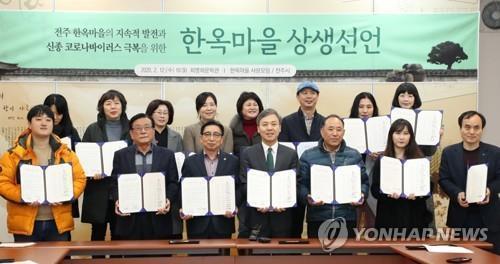 Meanwhile, landlords across the country are extending a helping hand to beleaguered small business owners by offering to lower or freeze rents.

The rent reduction campaign began in Jeonju, the capital of North Jeolla Province, about 245 km south of Seoul, and has garnered support from the central government and politicians.

About 10 landlords who own properties in Jeonju Hanok Village, a popular tourist destination featuring about 735 traditional Korean hanok houses, announced rent cuts of up to 20 percent on Feb. 12, vowing to support small business owners hit hard by the coronavirus outbreak.

Several days later, about 60 people who own buildings in central Jeonju announced their decision to freeze rents for five to 10 years, helping to spread the campaign to the rest of the country.

Landlords at Seoul's Namdaemun Market also joined the campaign by deciding to lower their rents by 20 percent for about 2,000 market merchants for the next three months.

A 51-year-old man who owns two buildings in the Munjeong neighborhood in southeastern Seoul told Yonhap News Agency that he recently informed his 10 tenants of a 30 percent cut in monthly rent, worth 20 million won (US$16,500).

"Business used to be good in this neighborhood. But the coronavirus outbreak has dealt a serious blow to small business owners. I want us to join hands to overcome this crisis together," said the landlord.

A self-employed man in Daejeon who has suffered a 90-percent plunge in sales told Yonhap that his landlord recently came to him and offered to take only 70 percent of the monthly rent this month.

The operator of Suseo Station in southern Seoul has decided to slash rents for its retail tenants by 20 percent for the next three months. 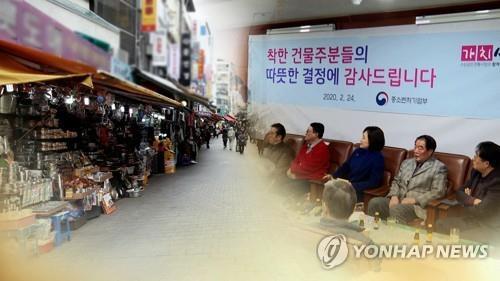 In response, Finance Minister Hong Nam-ki on Thursday announced the government's plan to pay for half of rent reductions by extending tax favors to the so-called good-hearted landlords.

"During the first half, the government will offer landlords income and corporate tax cuts worth 50 percent of their rent reductions, regardless of their incomes or amount of rent cut," Hong said in a media briefing, calling for parliamentary support for the revision of the relevant law.

The government will also pay for the replacement of firefighting facilities at properties where more than 20 percent of all tenants benefit from rent reduction, Hong said.

The ruling Democratic Party has vowed to speed up efforts to enact a law on the mutual prosperity of local commercial areas.

Kim Ki-mun, chairman of the Korea Federation of Small and Medium Business, has also proposed escalating the rent reduction campaign, saying its recent survey found 70.3 percent of the nation's small businesses had suffered from the coronavirus outbreak.

In a news conference in Seoul on Thursday, Kim urged the federation's 657 corporate and institutional landlords and 170,000 individual landlords to take part in the good-hearted landlord campaign.