(ATTN: UPDATES with the latest tally in last para)

Out of confirmed 1,017 COVID-19 patients in the southeastern city of Daegu, only 447 have been admitted to hospitals and another 570 are awaiting beds in hospitals while in self-quarantine at their homes as of early Thursday, according to city government officials.

Daegu -- South Korea's fourth-largest city, with a population of 2.4 million -- has emerged as a hotbed of coronavirus outbreaks in South Korea, along with neighboring North Gyeongsang Province. 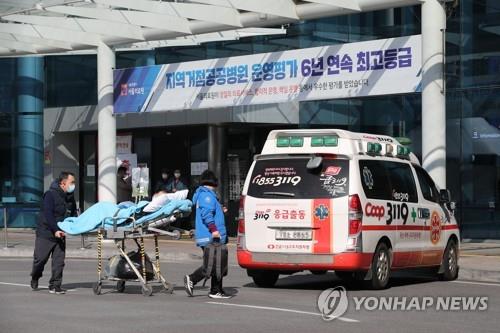 Concerns over a possible shortage of hospital beds in the hardest-hit region escalated after a 75-year-old virus patient who is tied to a religious sect in Daegu died of respiratory failure earlier Thursday, bringing the nation's death toll to 13.

The patient, despite having underlying diseases, was in self-quarantine at his home when he died while awaiting to be admitted to a local hospital.

"It is our principle to designate critical COVID-19 patients to hospitals that can provide intensive-care treatment," said Jeong Eun-kyeong, head of the Korea Centers for Disease Control and Prevention.

The KCDC said it has provided guidelines so that doctors can swiftly allocate hospital beds to patients in accordance with the severity of the disease and move serious patients to negative-pressure isolation wards.

As of Thursday, South Korea had 1,077 negative-pressure isolation rooms across the country. It is necessary for serious patients to receive treatment to prevent cross-contamination from room to room.

As such facilities have been overwhelmed in Daegu, big hospitals in Seoul have said they will accept virus patients who are in critical condition as well.

The country reported 256 new cases of the coronavirus on Friday morning, bringing the total number of infections here to 2,022, with 13 deaths. The infection numbers in Daegu and North Gyeongsang stand at 1,314 and 394, respectively.