SEOUL, Feb. 28 (Yonhap) -- South Korea's answer to quick and safe testing of the new coronavirus may be a drive-thru clinic and the country's health authorities said Friday it plans to deploy more such facilities and spots across the country.

The move came as a number of local governments have introduced testing facilities where medical staff take samples from people in automobiles who have suspected symptoms of COVID-19.

Under the planned measure, the authorities said they will establish a standard model of such testing facilities and provide it to local governments. 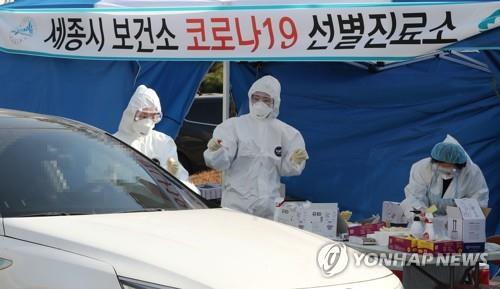 A driver does not have to get out of a car and only needs to open a window to be checked for fever or have samples taken by medical staff in protective suits.

Health authorities said the entire process will take only 10 minutes.

The city government of Goyang, just outside of Seoul, began operating the temporary testing facility at a public parking space after reporting five confirmed cases.

Other cities, including the western port city of Incheon and the administrative city of Sejong, also began operating their own drive-thru testing clinics earlier this week.

The country reported 256 new cases of the coronavirus Friday morning, bringing the total number of infections here to 2,022, with 13 deaths. The infection numbers in the southeastern city of Daegu and North Gyeongsang stand at 1,314 and 394, respectively.

S. Korea's only 'drive-thru' virus testing to be more available

S. Korea's only 'drive-thru' virus testing to be more available