SEOUL, Feb. 28 (Yonhap) -- South Korean stocks nose-dived more than 3 percent on Friday as foreigners continued their selling binge for a fifth consecutive session amid growing concerns over the spread of the new coronavirus. The Korean won rose against the U.S. dollar.

It marked the first time for the index to finish below the psychologically resistant 2,000-point level since September last year. 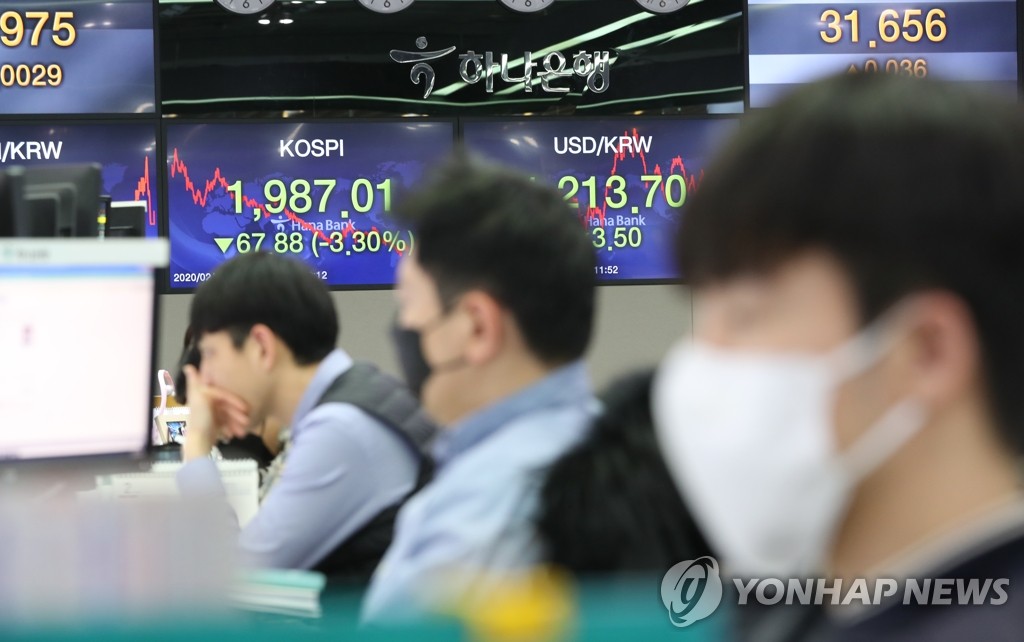 They offloaded a net 630 billion won worth of local stocks. Institutions bought a net 359 billion won, and individuals scooped up a net 223 billion won.

South Korea's confirmed cases of the new coronavirus surpassed 2,000 on Friday as the nation aggressively counters the fast-spreading virus with massive testing, particularly for 210,000 followers of a religious sect at the center of the epidemic.

"Investors are currently under panic on rising concerns that COVID-19 may hurt earnings of listed firms," Seo Sang-young, a researcher at Kiwoom Securities Co., said.

Shares lost ground across the board.

Hanjin KAL, the holding company of Hanjin Group, which has Korean Air Lines Co. and low-cost carrier Jin Air Co. under its wing, rose 3.38 percent to 67,200 won amid the owner family's dispute over management control.

The local currency closed at 1,213.70 won against the greenback, up 3.50 won from the previous session's close.