SEOUL, Feb. 29 (Yonhap) -- South Korea's health authorities said Saturday they have so far surveyed 88 percent of the members of the Shincheonji religious sect at the center of the new coronavirus outbreak here, with around 2 percent of them showing symptoms of the novel virus.

Of the estimated 210,000 church followers in the country, 171,000 answered questions about their health, according to the Korea Centers for Disease Control and Prevention (KCDC).

South Korea said it has collected samples from 3,381 church members who showed symptoms of COVID-19 infection.

The investigation excluded 863 members whose whereabouts were unknown, along with 16,000 minors. 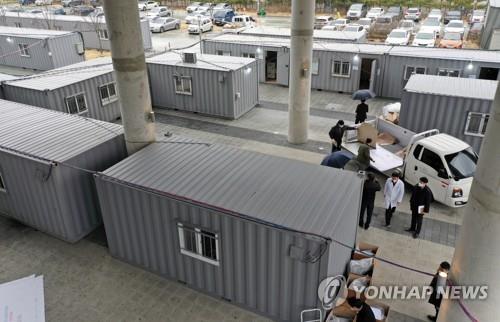 As of Saturday morning, South Korea reported a whopping 594 additional cases of the new coronavirus, bringing the total infections here to nearly 3,000 as the country intensified its anti-virus fight with a massive program of testing.

The sharp increase in confirmed virus cases in the country's fourth-largest city of Daegu, which has a population of 2.5 million, came as authorities began intensive tests on Shincheonji followers there.

The number of patients in Daegu, the epicenter of virus outbreak here, surpassed the 2,000 mark, accounting for more than 70 percent of the total cases in the country.

KCDC also said it is also struggling to contact 65,000 people not registered as formal Shincheonji followers who carry the risk of being infected.