An 86-year-old woman, who had been in self-quarantine at her residence while waiting to be hospitalized after it was confirmed she had COVID-19, was transferred to a hospital early Sunday but died due to dyspnea, according to the Daegu government.

She the underlying diseases diabetes and hyperlipidemia, it added.

Another victim was an 80-year-old male patient who had been to a clinic in the neighboring county of Chilgok. He tested positive on Friday and had been hospitalized, the government said, adding that he had long suffered from hypertension.

Earlier in the day, an 83-year-old patient in Daegu died, according to Kwon Jun-wook, a Korea Centers for Disease Control and Prevention (KCDC) official, at a press briefing. He had suffered a stroke and had hypertension.

As of 4 p.m., South Korea had reported a total of 3,736 confirmed cases. Of the total, more than 70 percent of the cases are in Daegu, with a cluster of infections linked to the Shincheonji Church of Jesus. 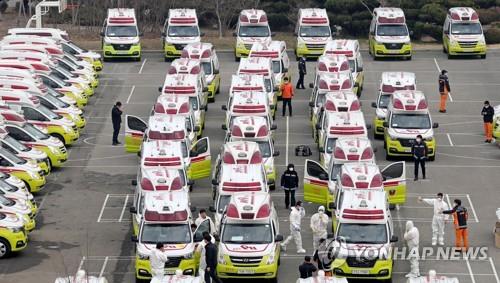