SEOUL, March 1 (Yonhap) -- The government will take millions of face masks from schools and redistribute them to the general public in order to address a supply shortage amid the surge of coronavirus cases.

The education ministry announced Sunday that 5.8 million out of 12.7 million masks purchased by elementary, middle and high schools will soon be available at post offices and stores of the National Agricultural Cooperative Federation, better known as Nonghyup here.

According to the ministry, schools in Seoul and surrounding regions of Gyeonggi and Incheon donated 1.6 million masks Saturday, and those in a dozen other regions will soon follow suit with 4.2 million.

Schools in Daegu and North Gyeongsang Province, the areas hit hardest by COVID-19, will be exempt.

Police have been cracking down on illegal hoarding of face masks, with some merchants and distributors purchasing them in bulk in anticipation of soaring prices.

The move to take away masks set aside for students drew the ire of school officials Sunday.

A vice principal at a Seoul elementary school said he was angry that he had to give away masks that he had worked hard to secure with his school's budget.

"We won't be able to get another mass supply of masks until after May," he added.

The government's disaster control headquarters said these schools will receive new masks before the start of the school year. The new school year was initially scheduled to start Monday, but it has been pushed back by three weeks in Daegu to March 23 and by a week in the rest of the country to March 9.

While being briefed about the current mask supply status, President Moon Jae-in called for priority to be placed on "devising all possible measures to resolve (supply) problems," according to Yoon Do-han, Cheong Wa Dae's senior secretary for public communication.

Pointing to the difficulty people have had purchasing masks, Moon stressed that making "plans for how to supply masks is not enough," and ordered officials to check what has gone wrong and resolve the problems. 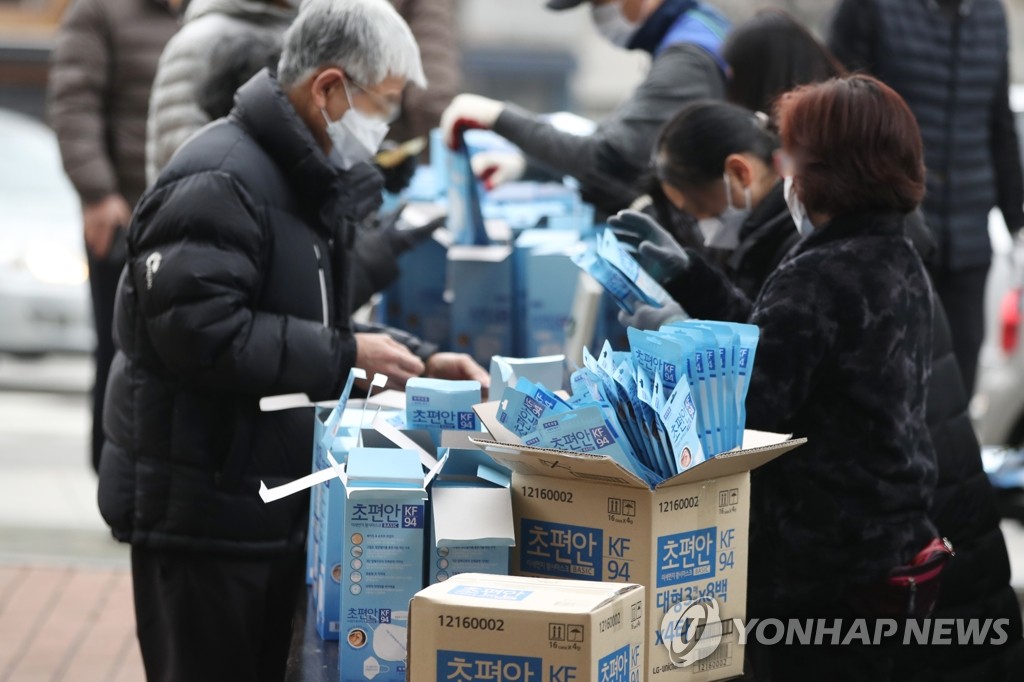