SEOUL, March 2 (Yonhap) -- The government plans to draw up an extra budget that is larger than 6.2 trillion won (US$5.12 billion) to fight against the new coronavirus and will submit a related bill this week, officials said Monday.

The government is preparing the supplementary budget bill to submit it to the National Assembly on Thursday, Finance Minister Hong Nam-ki said in a consultative meeting with the ruling Democratic Party (DP) and government officials over the virus outbreak.

The size of the extra budget will be larger than the 6.2 trillion won in fiscal spending set aside to handle the 2015 outbreak of Middle East Respiratory Syndrome (MERS).

The extra budget against the coronavirus may top 10 trillion won, depending on the amount of money allocated to cover a tax revenue shortfall. The government's 2020 budget is already a record 512.5 trillion won.

The participants in the meeting also agreed to set aside special budgets to support small businesspeople and medical workers for the hardest-hit southeastern city of Daegu and neighboring North Gyeongsang Province.

In the meeting, they agreed to increase emergency business funds for smaller merchants and firms and super-low rate loans by 2 trillion won each.

To stabilize people's livelihoods, 2.4 million parents with children will be provided with child care coupons. The government will offer consumption coupons to low-income families. 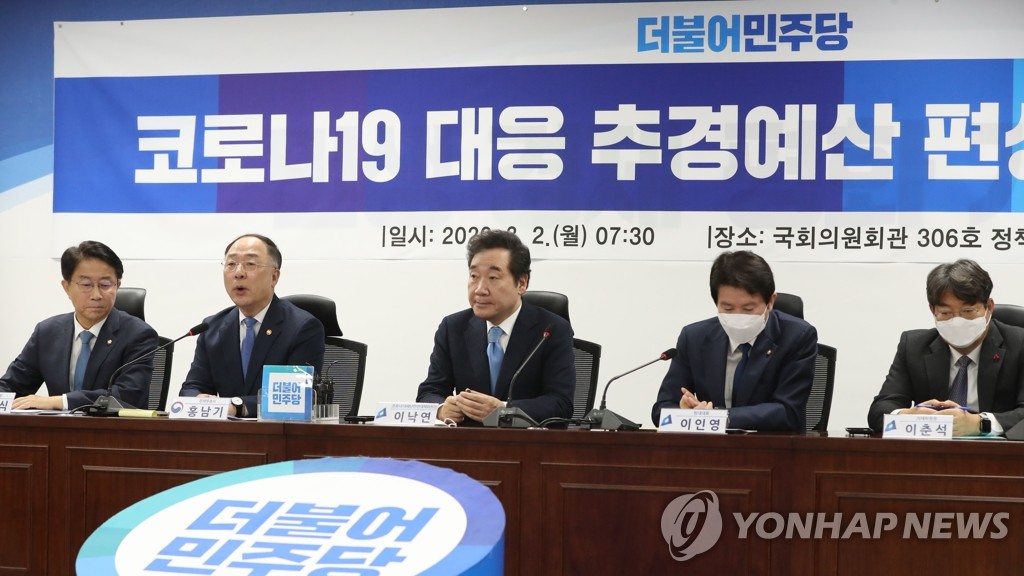