SEOUL, March 2 (Yonhap) -- The defense ministry pledged Monday to mobilize as many military medical staff and other personnel as possible to support the government's all-out battle against the new coronavirus, while striving further to stop the virus spreading further into the barracks.

Currently, 327 military doctors and nurses and 1,060 service members and other officials have been mobilized to help with civilian anti-virus efforts, as COVID-19 infections have rapidly risen to 4,212 cases and 22 deaths as of Monday morning.

About 600 additional personnel will also be assigned to help local governments with anti-virus operations, it added. Their focus has been and will be on the southeastern city of Daegu and the surrounding North Gyeongsang Province, where nearly 90 percent of the total infections have occurred.

"We have been preparing to mobilize the maximum possible number of military resources as long as it does not cause any medical vacuum in the military," Lee Nam-woo, chief of the ministry's personnel welfare office, said.

The military authorities have also been active to prevent the virus from spreading further into the barracks, according to the ministry.

So far, 28 military-related individuals -- 25 active-duty service members and three civilian workers for the military -- have tested positive. Sixteen are in the Army, 10 in the Air Force and one each in the Navy and the Marine Corps.

Around 9,790 service members are quarantined at their bases. Of them, around 910 have either shown symptoms or had direct contact with infected patients, while the remainder recently visited Daegu, North Gyeongsang or virus-hit foreign countries such as China, Hong Kong, Macao and Japan. 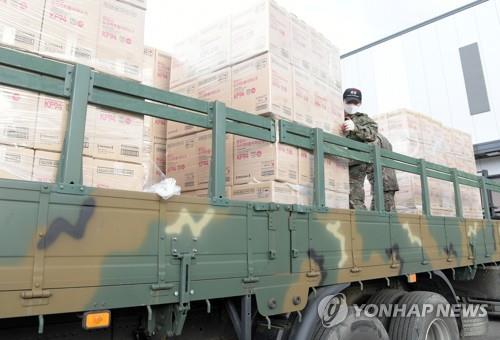