(ATTN: UPDATES with details of Lee's press conference throughout)

SEOUL, March 2 (Yonhap) -- The founder of a minor religious sect at the center of a rapid increase in coronavirus cases in South Korea on Monday apologized for the spread of the disease and vowed to fully cooperate with the government efforts to combat it.

"As the representative of Shincheonji followers, I sincerely apologize to the public," Lee Man-hee, founder and leader of the Shincheonji Church of Jesus, Temple of the Tabernacle of the Testimony, said in a press conference just outside of Seoul. "It wasn't our intention, but many people were infected."

He bowed down on his knees before reporters in the middle of the news conference in Gapyeong, some 60 kilometers east of Seoul, as a number of protesters shouted insults and slogans demanding Lee take responsibility.

He then reaffirmed that his group will render full "human and material support" to help combat the disease.

"We know that the health authorities have made all efforts to control the disease," the 88-year-old said. "We will do our best to support the government-led disease-control measures with all our resources." 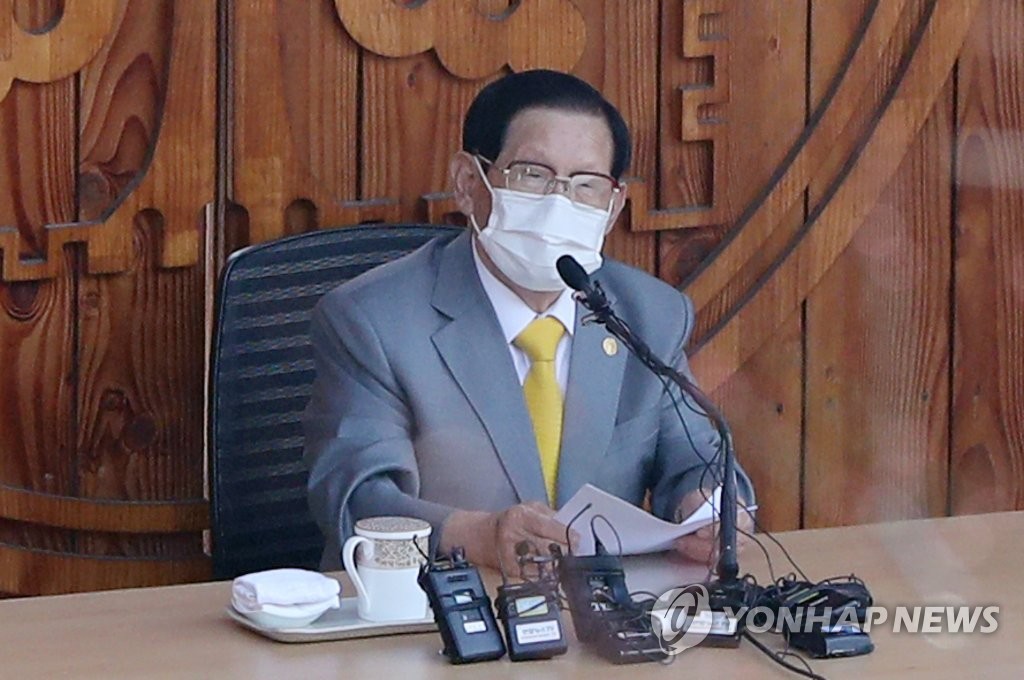 Lee's statement came one day after the Seoul Metropolitan Government said it has filed a suit against Lee and other Shincheonji leaders on charges of homicide and inflicting injury.

The Daegu branch of the Shincheonji church in the southeastern city has been suspected of being the epicenter of the recent spike in the number of infections.

The nation's 31st patient, a follower of the religious group in Daegu, was confirmed to be infected with the COVID-19 virus on Feb. 18.

The 61-year-old woman reportedly visited a Daegu church four times before and after she experienced symptoms of coronavirus.

Since then, Daegu, a metropolis of 2.4 million people about 300 kilometers southeast of Seoul, has become the biggest cluster of mass infection in the country.

The total number of coronavirus infections reached 4,212 as of Monday, with 3,801 patients from Daegu alone. In particular, 57 percent of the infected are linked to the Shincheonji church in Daegu.

The number of confirmed cases is expected to increase in the coming days as health authorities have begun testing about 310,000 members of Shincheonji.

Lee has also undergone examination and tested negative for the virus, according to the church.