Based on the global usage of their EV batteries, the combined market share of three South Korean EV battery makers -- LG Chem Ltd., Samsung SDI Co. and SK Innovation Co. -- stood at 30.8 percent in January, according to data from market tracker SNE Research.

LG Chem was the second-best performer overall, with a 22.9 percent market share, more than double its 9 percent share a year earlier. Robust sales of the Renault Zoe EV and the Audi e-tron EV -- both powered by LG Chem batteries -- helped the company's growth, SNE Research said.

Samsung SDI was fourth on the list with a 5.1 percent market share, while SK Innovation moved up five spots to rank seventh with 2.8 percent, according to the data.

Japan's Panasonic Corp. topped the list with a 27.6 percent market share in January, thanks to strong sales of the Tesla Model 3, which uses its batteries. At 21.9 percent of the market, China's CATL was the third-best player.

Meanwhile, the global usage of EV batteries came to 7.3 gigawatt-hours (GWh) in January, 6.2 percent down from a year ago, due to slump in the Chinese EV market, SNE Research said. 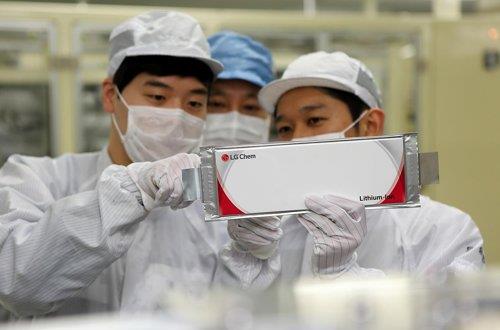