SEOUL, March 2 (Yonhap) -- South Korean stocks snapped a three-day losing streak to advance 0.78 percent on Monday, helped by the hint of a possible rate cut by the U.S. Federal Reserve to soothe virus angst that has jolted the global stock market. The Korean won rose sharply against the U.S. dollar.

The benchmark Korea Composite Stock Price Index (KOSPI) rose 15.50 points, or 0.78 percent, to 2,002.51. The main index plunged 12 percent in the past week amid worsening virus woes. 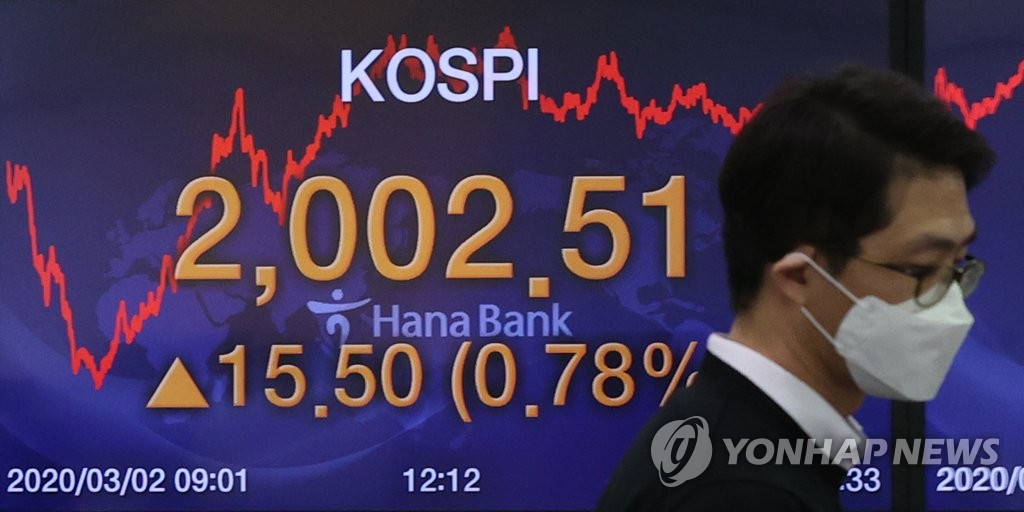 South Korea has reported a total of 4,212 confirmed coronavirus cases, with the death toll reaching 26, as of Monday.

Investors appear to be taking a positive cue from Fed Chairman Jerome Powell's comments on Friday that the central bank is open to a rate cut if necessary, as concerns over COVID-19 continue to escalate, analysts said.

Noh Dong-kil, an analyst at NH Investment & Securities, said that Powell's statement gave a boost to the main index.

Noh said North Korea's latest launches of what appear to be two short-range ballistic missiles into the East Sea appeared to have had no impact on the main index.

The projectiles were fired from areas near its eastern coastal city of Wonsan towards the northeast at 12:37 p.m. South Korea's Joint Chiefs of Staff said, adding that both flew around 240 kilometers, reaching a maximum altitude of around 35 km.

Hyundai Motor Co., South Korea's biggest carmaker, restarted its No. 2 plant in southeastern port city of Ulsan on Monday after shutting down the facility for three days.

The company reported on Friday that an employee had contracted the virus and had to close the plant, which produces sport utility vehicles, including the Palisade and the GV80.

Bond prices, which move inversely to yields, closed lower. The yield on three-year Treasurys rose 2.4 basis points to 1.128 percent, and the return on the benchmark five-year government bond gained 3.1 basis points to 1.211 percent.