SEOUL, March 2 (Yonhap) -- President Moon Jae-in on Monday visited a major South Korean military hospital offering medical services to soldiers and civilians infected with the new coronavirus, as the country has begun to mobilize military resources in earnest to fight the novel coronavirus.

He also met with a group of new graduates from the Korea Armed Forces Nursing Academy who are set to be dispatched to Daegu, the epicenter of the fast spread of the COVID-19 virus in the country.

Thousands of confirmed cases have been reported in the city of 2.4 million residents, 300 kilometers south of Seoul, and in nearby North Gyeongang Province. Most of the cases are apparently linked to a minor religious group, the Shincheonji Church of Jesus, whose members attended large, crowded services at a Daegu branch last month.

The government has designated the military hospital in Daejeon, 160km south of Seoul, as an institution specializing in responding to the infectious disease. The facilities, operated under the wing of the Armed Forces Medical Command, are in the process of expanding the number of beds to 303 from the current 98 to treat more people infected with the virus. 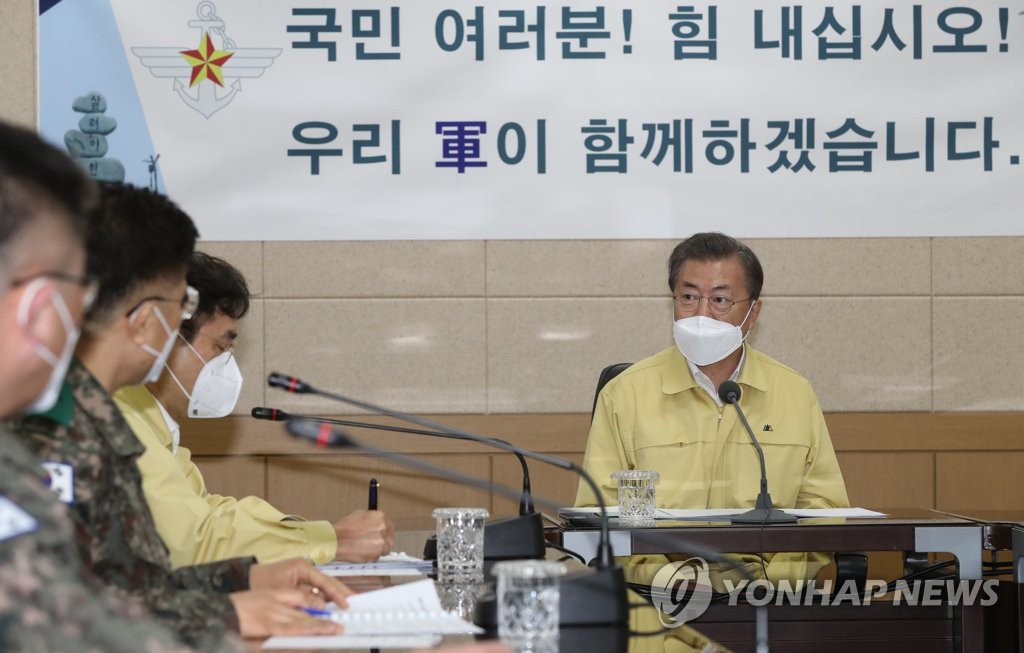 Moon received a briefing on its operation and preparations to accommodate patients from Daegu and North Gyeongsang.

"(South Korea) is making its all-out response to COVID-19 at the national level and our military is also assuming a big role," the president said. More than 1,400 military medical service members, accounting for nearly a quarter of the total, have been deployed to quarantine and medical service sites, he pointed out.

He instructed them to continue doing their best. "Protecting the health and safety of the people is the military's mission," he said.

Moon then visited the Korea Armed Forces Nursing Academy in Daejeon, becoming the first sitting South Korean president to do so.

Seventy-five new nurse officers will be sent to Daegu soon for their first mission after graduating from the academy.

Speaking to the entry-level officers, Moon said he "feels sorry" about assigning "such a tough task" to them.

"But I know that each of you has already completed more than 1,000 hours of practice. I expect you to play an ample, excellent role," he added. "I won't forget your devotion. I will surely remember it."

The president earlier ordered his administration to mobilize all available state resources to help contain the virus.