They urged Pyongyang to halt such acts, which are "not helpful to efforts to ease military tensions on the Korean Peninsula," Cheong Wa Dae said in a press statement on the results of an emergency videoconferencing session that was presided over by Chung Eui-yong, director of national security at the presidential office.

They analyzed the background and intention behind the secretive North's staging of the combined strike exercise, combined with the launch of the "short-range" projectiles," according to Cheong Wa Dae.

It noted that the North's military conducted its previous joint strike training on Feb. 28.

The ministers, in particular, "expressed strong concern" that the North has triggered military tensions with "continued" drills in the vicinity of Wonsan in addition to the resumption of the firing of short-range projectiles after three months, Cheong Wa Dae added.

Earlier Monday, the North fired projectiles from its eastern coastal city of Wonsan into the East Sea, the South's military said, adding that it is checking relevant details such as the projectiles' type and flight distance.

It was the first time this year the South's armed forces had detected a major projectile launch by the North.

Cheong Wa Dae stopped short of convening an immediate National Security Council (NSC) meeting in response to Pyongyang's latest projectile launch, indicating that it does not view the launch as a serious provocation. 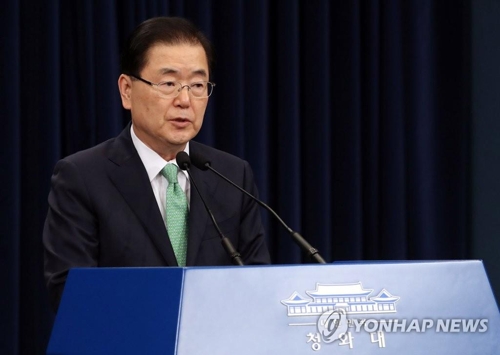