SEOUL, March 2 (Yonhap) -- SsangYong Motor Co. said Monday its sales fell 25 percent last month from a year earlier, partly due to a shortage of parts caused by the outbreak of the new coronavirus limiting its output.

SsangYong Motor sold 7,141 vehicles in February, down from 9,481 units a year ago, the company said in a statement.

SsangYong Motor stopped the operation of its sole plant in Pyeongtaek, 70 kilometers south of Seoul, for nine working days in February, as its Chinese parts suppliers halted operations due to an extended Lunar New Year holiday aimed at ending the spread of the virus outbreak there.

SsangYong Motor's lineup is composed of the flagship G4 Rexton, as well as the Tivoli, Korando and Rexton Sports. 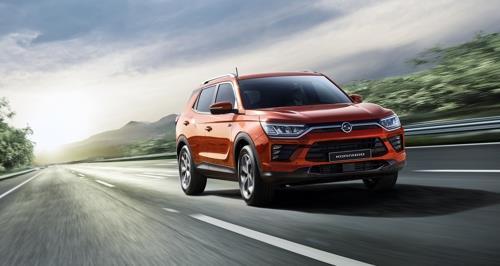 Keywords
#SsangYong Motor-Feb. sales
Issue Keywords
Most Liked
Most Saved
Most Viewed All Categories
Most Viewed More
Most Viewed Photos