"Priority distribution" is going to South Korea, he said at a joint press briefing with Esper. The general noted that the allies have already postponed combined military exercises scheduled for this month due to concerns about the spread of the virus. 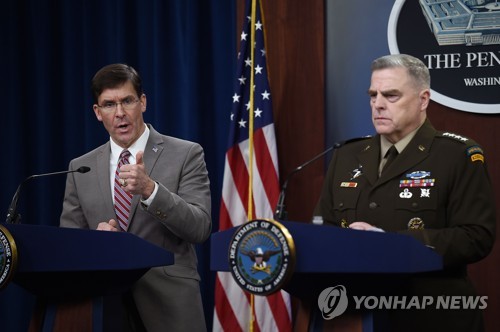 The same day, Gen. Robert Abrams, commander of U.S. Forces Korea, inspected an American base in the southeastern city of Daegu, the epicenter of the outbreak in South Korea.

The visit came two days after the U.S. State Department raised its travel advisory for the city to the highest level, urging Americans not to travel there.

The rest of South Korea has remained under the second-highest "Level 3," which means "reconsider travel."

USFK has separately implemented various measures to contain the spread of the virus, such as by enhancing entry control and limiting non-mission-essential meetings as well as off-installation travel by its personnel.