SEOUL, March 3 (Yonhap) -- President Moon Jae-in stated Tuesday that South Korea has begun a "war" against COVID-19 as the crisis in Daegu and nearby North Gyeongsang Province peaks, placing all government agencies on a 24-hour full alert.

Speaking at a weekly Cabinet meeting, he announced plans to inject 30 trillion won (US$25 billion) of funds directly or indirectly into the virus response. The meeting was held in combination with a daily session of the Central Disaster and Safety Countermeasure Headquarters at the government office complex in Seoul.

He said the continuing confirmation of additional cases is "a critical phase."

He pointed out the situation has become completely different before and after the massive infections linked with a fringe religious group known as Shincheonji. Many of its followers were found to have contracted the virus after attending crowded worship services at a Daegu church in February.

His remarks came as health authorities put the total number of those infected with the virus in the nation at 4,812, up 600 from Monday. Most of the cases were reported in Daegu, 300 kilometers southeast of Seoul, and the neighboring province.

"The crisis in Daegu and North Gyeongsang Province reached its peak and the whole country has entered a war against the infectious disease," Moon said.

He ordered all of the government's organizations to shift to a "24-hour emergency situation room system," citing the need to bolster readiness to handle quarantine and economy-related measures.

Moon said the government would spend 30 trillion won on dealing with the crisis, including a planned supplementary budget.

The government is set to submit an extra budget bill to the National Assembly on Wednesday. It has not revealed the exact size amid the widespread view that it would be worth around 10 trillion won.

Moon urged lawmakers to pass the bill as early as possible, saying the money will be used mainly to help tiny shop owners, low-income people and others in need as well as to invigorate domestic consumption and expand medical equipment and facilities against the virus.

He also apologized deeply to the public for the failure to supply masks quickly and sufficiently. He called on the government to take strong steps to address the problem.

Media here have carried a number of reports on South Koreans waiting in long lines to get hold of masks. The government has already stepped in to control mask exports and retail systems, but many people are still struggling to buy masks.

Moon called for thorough measures to ensure speedy production of masks and "rational and fair" supply.

He questioned whether relevant government officials have been "sensitive" to the inconveniences and desperate necessity of the people and urged a swift resolution, Kang said.

On the decision to put off the beginning of this year's spring semester by three weeks to March 23 for all kindergartens, elementary and secondary schools nationwide, Moon called on the education ministry to take "effective" measures against potential problems in the child care system.

Meanwhile, Moon talked with the mayors and governors of major cities and provinces via videoconferencing during the session.

Daegu Mayor Kwon Young-jin apologized to Moon over his demand that a presidential emergency order be invoked to secure 3,000 more sickrooms immediately for patients in the virus-stricken city, Kang told reporters.

The mayor was quoted as telling Moon that he made the call without a sufficient review of relevant legislation.

Under South Korea's Constitution, the president is empowered to issue the emergency order in the event of a grave skirmish or other national crisis only when it's "impossible" to wait for the National Assembly to convene a session.

The National Assembly is in normal operation and a plenary session is under way, however, Kang noted. 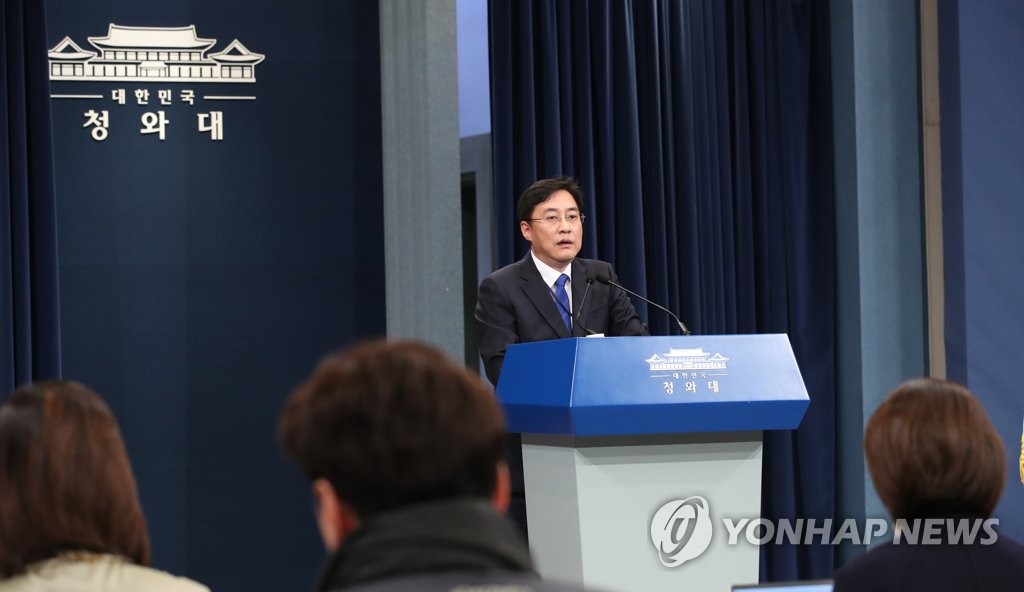