SEOUL, March 3 (Yonhap) -- The War Memorial of Korea, a museum commemorating the 1950-53 Korean War, said Tuesday it has donated 10 million won (US$8,400) to support the livelihoods of Ethiopian veterans who fought in the three-year conflict.

The museum held a ceremony earlier in the day to deliver the money to Seoul-based nongovernment organization World Together, which carries out aid activities in the African country.

Ethiopia was the only African country that dispatched ground forces to help South Korea during the war.

Among a total of 6,037 Ethiopian soldiers who fought in the war, 123 died in battles while another 536 were injured. Around 160 veterans were still alive as of last year.

This year marks the 70th anniversary of the outbreak of the war, which ended in a truce, not a peace treaty. 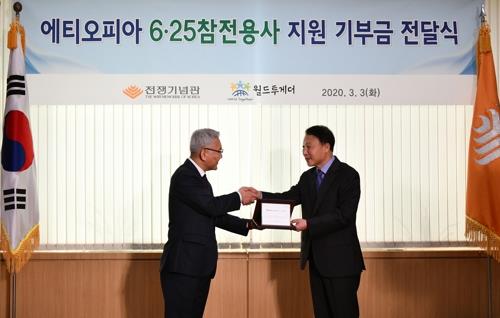