SEOUL, March 3 (Yonhap) -- South Korea is preparing an extra budget bill worth more than 10 trillion won (US$8.37 billion) to help fight against the new coronavirus, the finance minister told a parliamentary session Tuesday.

Finance Minister Hong Nam-ki added that the outbreak of COVID-19 may undercut the country's economic growth by 0.2 percentage point this year.

"(The outbreak) will probably have a negative impact on gross domestic product (GDP) in the first quarter and on this year's overall growth rate," Hong said at a parliamentary interpellation session.

The fast spread of the coronavirus is widely expected to put downward pressure on South Korea's economy.

Last week, the Bank of Korea cut its growth estimate for this year to 2.1 percent from 2.3 percent forecast three months earlier, citing the impact of the coronavirus.

To minimize the economic fallout of the virus outbreak, the government is preparing a supplementary budget and will submit the related bill to the National Assembly on Thursday.

Hong earlier said the envisioned extra budget would be larger than 6.2 trillion won, the amount of fiscal spending included in the 2015 extra budget to cope with the MERS outbreak.

The government has rolled out emergency measures totaling 20 trillion won to cushion the impact of the virus outbreak.

"Together with the extra budget, the government expects expansionary fiscal spending worth 30 trillion won," Hong said. 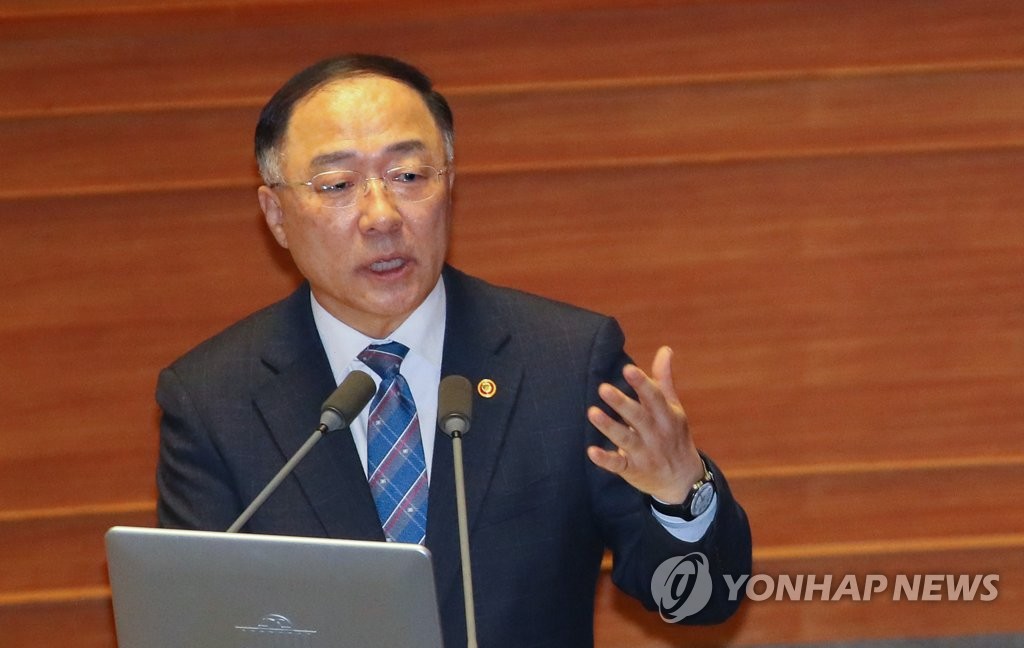 Amid the growing number of infections here, Hong also vowed to expand the supply of protective masks as demand has been running high over past weeks, with many citizens forming long lines to purchase them at local stores.

"We plan to provide some 130 million protective masks for those in the low-income bracket," Hong said.

South Korea is planning to increase the daily output of masks to at least 13 million units from the current 10 million, he added.

To further increase the supply, South Korea may also consider importing masks from other countries, including Brazil and South Africa.

While South Korea earlier said it will distribute 50 percent of production to state-run retail platforms to cope with the soaring demand here, Hong said the government is considering increasing the quota as well.

The extra budget will also reflect the country's efforts to beef up its medical infrastructure against infectious diseases, the minister said.