Remdesivir, an investigational medication developed by U.S. pharmaceutical giant Gilead Sciences Inc., was previously tested against the Ebola virus. The drug has shown efficacy in COVID-19 patients in other countries on a trial basis as there is no specific treatment.

The sources said Gilead Sciences has been granted approval from local drug authorities to begin phase-three clinical trials of remdesivir for the treatment of COVID-19 in adult patients.

The approval by the Ministry of Food and Drug Safety came only four days after the application.

"Experimental drugs under clinical trial are sometimes granted approval for usage in cases where diseases are life-threatening and there is no other treatment option," a ministry official said on condition of anonymity. 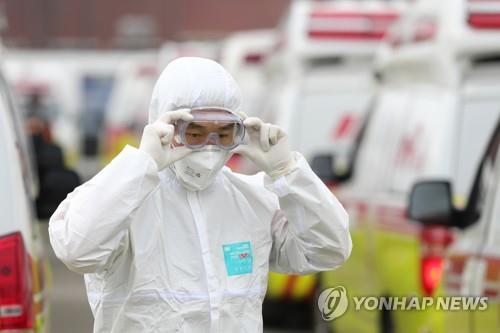 Remdesivir, currently under clinical trials in several countries, such as China, the epicenter of the outbreak, the United States and Japan, has not been fully approved by any country.

COVID-19 patients will be administered with a therapy called HzVSFv13, an injection-type of VSF developed by mid-sized bio firm ImmuneMed.

So far, most COVID-19 patients have been given treatments to relieve their symptoms while severe patients were given a combination of flu medicine and Kaletra, an anti-retroviral medication that was developed by global pharmaceutical firm AbbVie Inc. and is used to treat HIV.

The public health agency earlier announced a proposed protocol, which advises doctors to administer Kaletra twice a day to elderly patients and those who show severe symptoms of the coronavirus.

The 374 new cases, which were identified over the past 16 hours on Tuesday, brought the nation's total number of infections to 5,186. Tuesday's additional cases followed 600 new cases as of end-Monday, the nation's sharpest daily spikes of 1,062 as of end-Sunday and 813 as of end-Saturday.

Gilead's remdesivir to be used to treat coronavirus patients in S. Korea

Gilead's remdesivir to be used to treat coronavirus patients in S. Korea