A fire broke out on the 29-ton ship at around 3:18 a.m. in waters about 74 kilometers southeast of Udo Island near Jeju, according to the maritime police.

Of the three South Korean and five Vietnamese people aboard, two South Koreans have been rescued so far, with search operations still under way.

Adverse weather conditions have hampered efforts to put out the fire and find the crew, a Coast Guard officer said, adding that they are exploring various possibilities as to their fate. 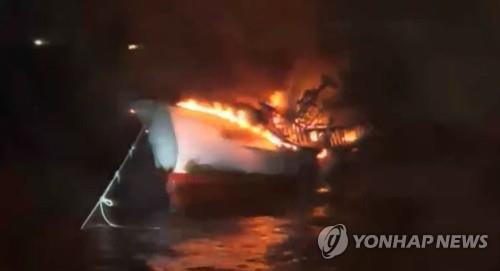 6 missing in fishing boat fire in waters off Jeju Island

6 missing in fishing boat fire in waters off Jeju Island