Foreigners turned net buyers for the first time in eight sessions, purchasing 149.5 billion won (US$126 million) worth of stocks and giving a boost to the main index. 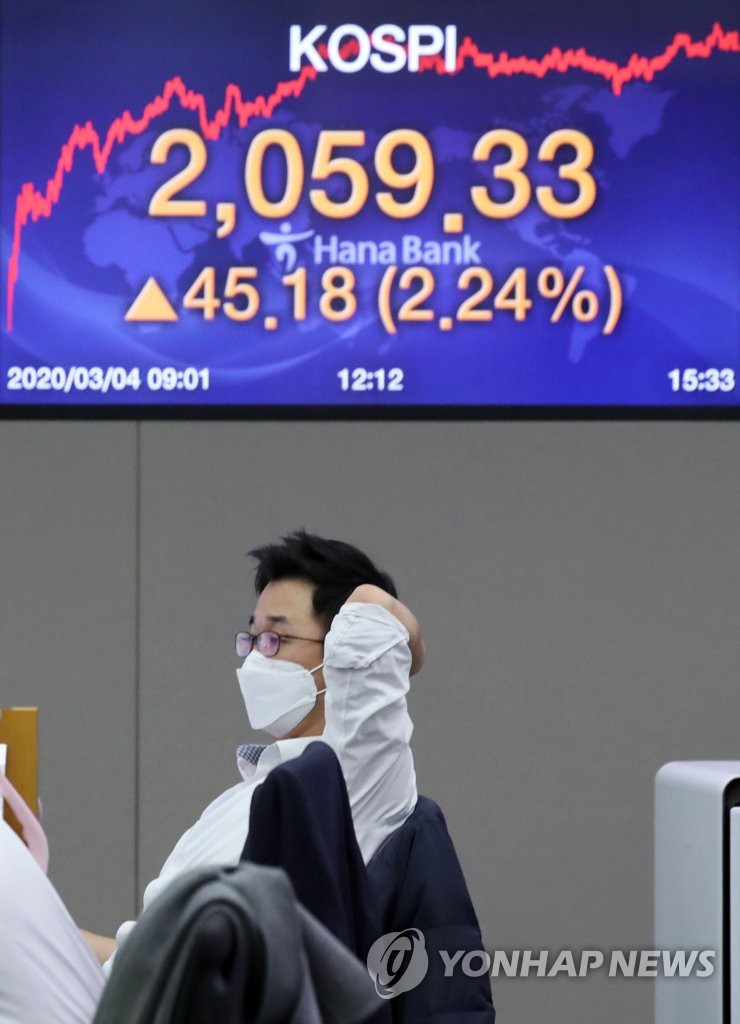 "The broad index ended higher due to the foreign buying and expectations of an extra budget and other policy issues as well as a possible rate cut," said Huh Jae-hwan, a strategist at Eugene Investment Co.

The U.S. Federal Reserve slashed interest rates by half a percentage point in an apparent move to mitigate the economic fallout from the coronavirus outbreak.

The Fed's move raised the possibility that South Korea's central bank could cut its key rate. Last week, the Bank of Korea froze the benchmark interest rate at 1.25 percent. The bank's next rate-setting meeting is scheduled for mid-April.

COVID-19 has killed 33 people and infected more than 5,300 others in South Korea.

Earlier in the day, South Korea proposed $9.8 billion in extra budget to tackle the economic fallout from the virus and improve its readiness against contagious diseases. The budget is subject to parliamentary approval.

In Seoul, most large-cap stocks advanced.

Hanjin KAL, the holding company of Hanjin Group, which has Korean Air Lines Co. and low-cost carrier Jin Air Co. under its wing, rose 4.83 percent to a record high of 84,700 won amid the owner family's dispute over management control.

Among decliners, Lotte Chemical fell 2.39 percent to 183,500 won after a fire at its plant in South Korea's southwestern city of Seosan injured at least 31 people and led to the suspension of seven of its 13 facilities.

Bond prices, which move inversely to yields, closed higher. The yield on three-year Treasurys fell 8.1 basis points to 1.029 percent, and the return on the benchmark five-year government bond shed 8.2 basis points to 1.116 percent.

(LEAD) Seoul stocks up for 3rd day on stimulus hope

(LEAD) Seoul stocks up for 3rd day on stimulus hope