SEOUL, March 4 (Yonhap) -- Global super band BTS debuted three of its new songs on the Billboard Hot 100 singles chart for this week on Wednesday while topping a string of other Billboard charts with its new album, "Map of the Soul: 7."

According to the weekly Billboard chart updates, "ON," the lead track of "7," ranked 4th on the Hot 100 chart dated March 7, as previously announced by the music magazine. It was BTS' first top 5 hit on the Hot 100.

"My Time," a solo song by Jungkook from "7," and Jimin's solo track "Filter" debuted at 84th and 87th on the Hot 100 respectively, putting three songs simultaneously on the Billboard singles chart for the first time in Korean pop history.

The new album was also the leader on the Billboard 200 albums chart dated March 7, while the band's 2018 album, "Love Yourself: Answer," re-entered the chart at 133rd.

The album also topped Billboard's Top Album Sales, Top Current Album Sales and Independent Album chart for this week while the band reclaimed the No. 1 spot on the Artist 100 chart, besting Justin Bieber, and maintained its reign on the Social 50 chart. 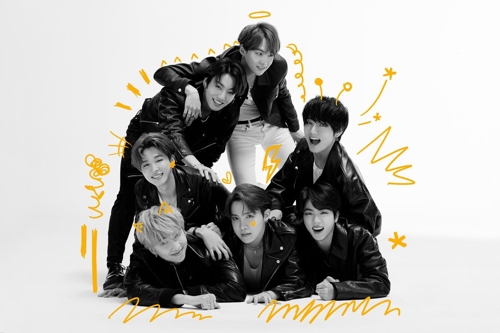 Another K-pop album, "All About Luv" by Monsta X, was 160th on the Billboard 200 for this week after debuting at 5th last week, making the band the third K-pop group to hit the top 5 on the albums chart.

With sales of 376,879 copies, the BTS album debuted atop the weekly chart of album sales between Feb. 24-March 1, according to the Oricon chart updates and Big Hit Entertainment.

The group scored its first No. 1 on the chart in 2016 with its second Japanese full-length album, "Youth."

Keywords
#BTS Map of the Soul: 7 Billboard
Issue Keywords
Most Liked
Most Saved
Most Viewed All Categories
Most Viewed More
Most Viewed Photos