SEOUL, March 4 (Yonhap) -- The leader of the Shincheonji religious group at the center of the coronavirus outbreak in South Korea has been recognized as a man of national merit for his participation in the 1950-53 Korean War, the veterans affairs ministry said Wednesday.

Lee Man-hee, founder and leader of the Shincheonji Church of Jesus, has come under intensive public fire after a number of his followers have been confirmed to have the COVID-19 virus, with critics blaming the mass infections on unique worship practices and the secretiveness of the religion.

Nearly half of South Korea's total coronavirus patients are related to Shincheonji.

As rumors have spread that Lee is a state-recognized war veteran, calls have grown for depriving him of his status as a man of merit.

"Lee participated in the war between May 1952 and April 1953 and was registered in 2015 as a Person of National Merit for his service," the Ministry of Patriots and Veterans Affairs said in a message to reporters.

The ministry had refused to confirm the fact, saying that it is personal information.

"But Lee agreed today to provide the information to the public," the ministry added.

Veterans are entitled to enjoy special treatment such as receiving a pension and being buried at a national cemetery.

As of Wednesday, South Korea has reported a total of 5,328 confirmed cases. Of 4,006 cases that occurred in the southeastern city of Daegu, 64.5 percent are linked to Shincheonji, according to the Centers for Disease Control and Prevention (KCDC).

Lee also underwent a test this week and tested negative for the virus, according to the authorities. 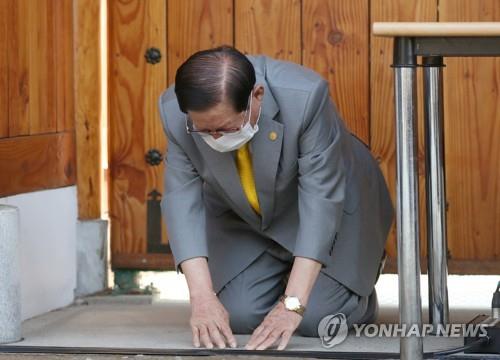